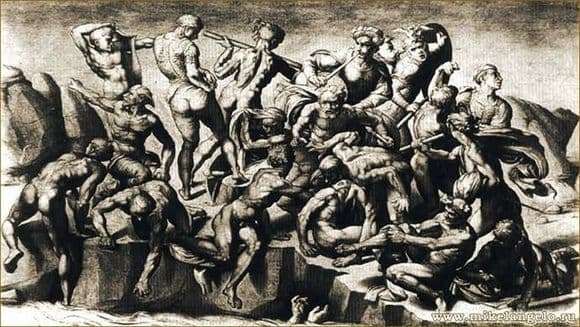 Michelangelo worked on a huge cardboard. For this, he was allocated the premises of the dyer hospital. He fills the canvas with naked soldiers who decide to swim in the heat in the Arno River. But at that time, anxiety was heard in the camp calling for a fight. Michelangelo depicted the soldiers who hastily crawl out of the water.

They seek to come to the aid of their comrades as quickly as possible. Some of them are more likely to arm themselves, others – buttoning their shells, still others are already jumping on horses. Here you can see the figures combined into groups. They are sketched in completely different ways. Some of them are drawn only with strokes.

Others are delineated with coal. Michelangelo was able to demonstrate all his skills on one sheet. Cardboard “Battle of Kashin” ordered Michelangelo government. He tried to convey the desire of people to protect the republic. The work was not finished. Only a cardboard was created, which became the preparatory stage for the creation of a full-size image. Only copies of this cardboard have reached our days. The painter does not depict battle scenes. We see a peaceful event – the soldiers who decided to swim. The main character is missing here. Each of the participants of the canvas is independent and equal. They are united only by concerted action.

The artist depicts 18 figures in various poses. They are much more interesting for a painter than the plot itself. Michelangelo depicts the minutes that precede the battle. The decor is outlined only slightly. Michelangelo highlights the shape. We see how skillfully he portrays the human body. The heroic beginning is embodied here not in the twists and turns of the plot, but in the eloquent body language. The artist demonstrates