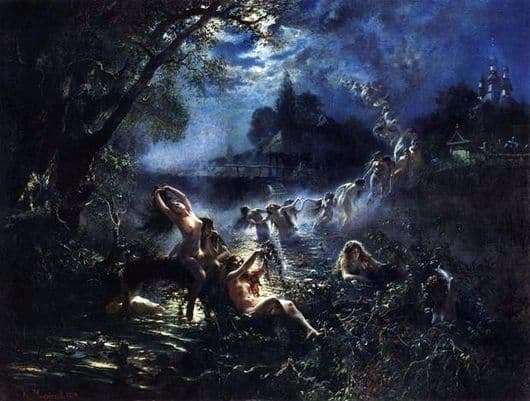 The painting of the Russian artist Konstantin Egorovich Makovsky “Mermaids”, created in 1879, at one time made a lot of noise. It was shown at the Mobile Exhibition, which Alexander II himself visited, despite the fact that the Russian emperor had no interest in art.

In East Slavic mythology, mermaids were considered not only mysterious, river-dwelling characters, but also specific people. According to old beliefs, it was believed that girls who died before marriage, “enlisted” but not waiting for weddings, as well as unbaptized babies, became mermaids. They could also be people who died in the Rusna week, which lasted from 19 to 24 June.

On the Picture of Makovsky is depicted exactly one of the merry days. Earlier these days were called the holiday of Rusalia. Due to the fact that mermaids were associated with the water element, according to Old Slavic customs, they were called on to prevent droughts on a holiday, despite the fact that they were considered “evil spirits”. The Russian artist depicted his mythical heroines in their traditional place of stay – water and swaying in the trees.

As in beliefs, on Makovsky’s canvas, mermaids have long thick brown hair that falls below the shoulders and covers the upper bare part of the body. They have no fish tail, because in Slavic mythology they have a human appearance. In folk culture, they personify the transition from the mysterious world of the dead to earth, and vice versa. The palette of colors chosen by Makovsky perfectly conveys a mystical mood: against the background of a dark night, nudes go to the sky, surrounded by a hazy mist of the body of beautiful mermaids.

The artist is not without reason portraying the church on the right. The holiday of Rusaliya in its content was purely pagan, which means it was a “godless phenomenon”, the Lord is ready to exorcise evil spirits.