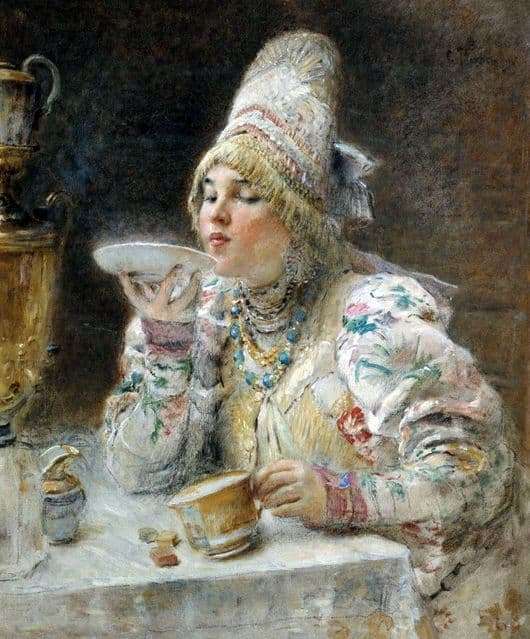 In Russia, residents learned about tea only at the beginning of the 17th century. For a very long time it cost dearly, therefore simple workers and people with average incomes could not afford it. In their homes, the nobles very carefully guarded tea: it was kept by mistresses in their bedrooms, in small caskets. For this reason, the first use of tea was considered an indicator of a rich life. But at the beginning of the 19th century, it became accessible to people with a small income. In our country, the use of tea is filled with its own traditions. And therefore it served as a plot for many paintings.

Konstantin Makovsky painted a picture of “The Tradeswoman for Tea” in 1914 in the style of romanticism.

This merchant is a portly, portly woman who is healthy. A Russian beauty with a blush on her cheeks sits at a table on which sweets lie, stand for food, with one hand she holds a cup with fragrant tea, and another saucer from which she drinks tea. Judging by her multicolored beautiful old dress, ornaments on the neck, headdress, it is clear that she lives in prosperity. The image of the beauty at the table is drawn on a black background, it is clear that nothing superfluous distracts the audience, and through the picture you also feel how the merchant is enjoying tea.

This picture was painted by this talented man in 75 years – already on the slope of his life path.

He was a well-paid artist during his career. At the beginning of his way he wrote more for his earnings – portraits, gradually he became known as a fashionable portrait painter.

It is difficult to break away from this bright and expressive image in the picture.

The artist himself was engaged in collecting items related to everyday life that existed among Russians. He sought to be surrounded by beautiful things, which was reflected in his art: he created genre scenes “in the Russian style”, painted beautiful women in ancient costumes.