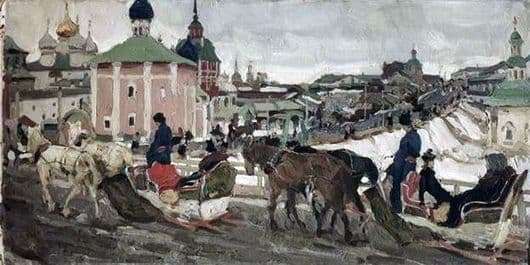 At first, when you read the name of the picture, you think that it should depict a summer day, just when Troitsin is celebrated. However, on the canvas of Konstantin Yuon, we see snow and sleds. People rush to prayer in the Trinity-Sergius Lavra, which still remains the same as that day more than a century ago.

Of course, now you will not see horses there, cars are scurrying around, but the temples are still the same, they are alive, like faith in God. And here she remained alive even when religion was persecuted. But back in 1903, when the artist finished this picture, no one even could conceive that a coup would happen soon. And here we see far from poor citizens, but quite well-off, who still remember that there is heavenly power over them, and that they need to pay tribute. To show that the sleighs are moving in a whole line, the author writes a panoramic picture.

The canvas is stretched horizontally, and although only two teams are visible in the foreground, it seems that both are in front of them and there are the same carriages behind them. By the way, one of them is clearly visible in the distance, where the road turned, and the second one is also guessed. Even further visible is the oncoming carriage, and someone goes to the temple on foot, believing that after such a transition a prayer will be much better. Usually pilgrims did this.

So no need to wait specifically for Trinity Day, you can gather in the temple and on such a bad day, when there are gray clouds in the sky and snow under your feet. Only red details of lacquer sleighs and bright bricks of temple buildings remind of a real holiday. However, this may be the usual Sunday, which for every Orthodox Christian was considered a holiday.