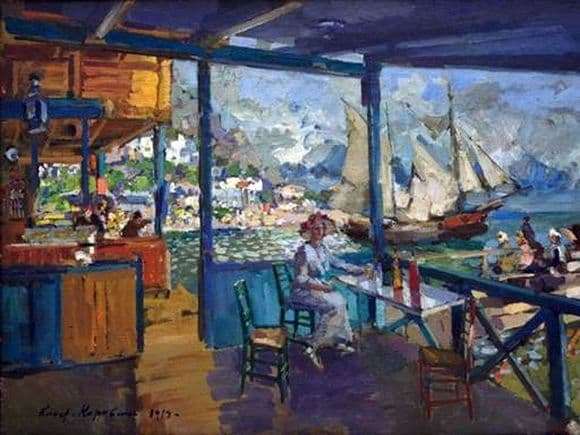 This artist was distinguished by its special strokes. They could be different: now smoothed, then textured and expressive, then dense. This picture was painted during the period when he left for Gurfuz in 1914. He was very upset by the misfortune that happened to his seventeen-year-old son, and he left for the coast. However, this had no effect on his work. He sincerely believed that it was impossible to bring notes of a minor to work only because of a bad mood. The artist was confident that people should be able to rejoice, no matter what.

Korovin stated that the paintings should bring people light and happiness, as can be seen in this picture. The paints here are penetrated by light, and their brightness and richness prevails over the ease that arises when looking at a picture. Everything on it is made up of amazingly beautiful combinations. At first glance, careless, very precise dense strokes create a sense of three-dimensional picture. And the seeming inaudibility of objects in the background makes us guess what is not visible in the picture. Light and bright colors predominate, and on the water you can see highlights.

The central character of the plot is a girl who sits on an ordinary wooden chair on the veranda of a cafe. Her relaxed look and bright dress indicate that she is not in a hurry. In the distance stands a large sailboat on the dock, its bright sails, traced with large strokes, attract the attention of not less than the figure of a young woman in a hat. There are a lot of people on the pier, perhaps one of them is fishing, but the artist did not draw this.