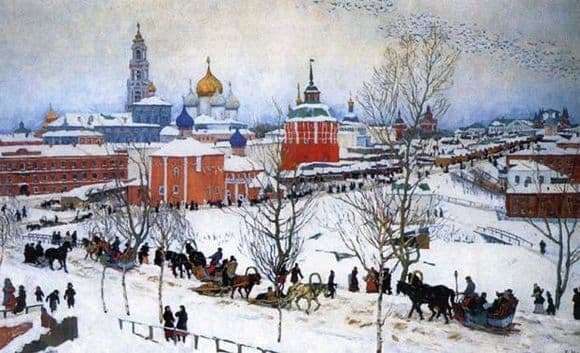 KF Yuon is a bright representative of impressionism, he was very fond of the city of Rostov-on-Don and often painted it. The painting was painted in 1906. Difficult times for Russia, revolutionary ideas spread among the population and attempts to implement these ideas were made constantly.

The artist displayed the power of the Russian city, both from an architectural point of view and from a spiritual one. Large and modern buildings are combined with wonderful temples. Poppy churches as gilded and heavenly color. There is a combination of different cultures and eras. Golden domes are typical for Russia, sky poppies are quite rare. One can also see the tower in architecture resembling European style.

The picture shows a lot of people. An amazing mixture of classes and representatives of various social classes. In an endless stream of sleds you can see both luxurious painted sleds harnessed by thoroughbred beasts and poor carts pulled by skinny nags. All people tend, most likely, to the temple. Such a procession is possible only on a large religious holiday. The canvas depicts a lot of people and storylines, the diversity of work is simply amazing. This picture can be viewed forever, finding new scenes from life. People are depicted not just as giving a picture of mass.

Each person is engaged in a specific business. An endless series of sleds goes deep into the city and it seems that the flow of people will never end. Both adults and children mixed up here and, despite the freezing weather, everyone wants to get into the service. The artist very accurately conveys the greatness of the city and the spirituality of the Russian people. Large buildings talk about wall reliability and safety, and the flow of people determines the need of the city, the need for its buildings. The Russian people, despite everything, honors their traditions.