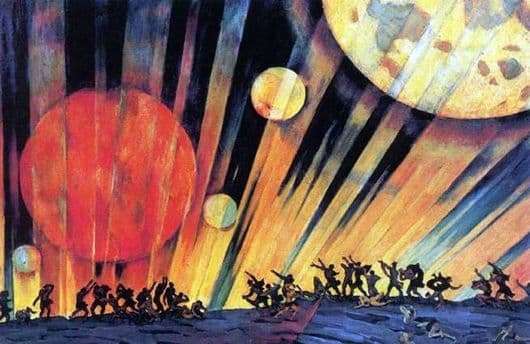 The canvas “New Planet” was painted by Russian artist Konstantin Yuon in 1921. Since the artist often engaged in the design of theatrical platforms, there is a version that this canvas was intended to become a theatrical decoration. Just during the creation of the canvas, the October Revolution took place, and the country was soon to turn into a Soviet state.

Perhaps the author gives an analogy and compares the change of state with the end of the world. Everything happens so unexpectedly that surprised people in delight, fear and confusion run out onto the street, where they saw a real parade of planets.

The dark sky is illuminated by the glow of fiery red and yellow bodies hanging in the air. These dumb giants are witnessing the revolution of the Russian social regime. The picture embodies a storm of emotions, admiration and suffering. People run on cold, dark sapphire earth, stumble on each other, fall on their knees, raise their hands to the sky, clutch their heads in complete despair, run away.

All this crowd of raging people is born under bright golden rays, which are beaten out of the earth by a mighty sheaf and rush high to distant planets. The rays of light as if symbolize the rebirth of the earth, its transformation. She is still full of strength and, despite bloody wars and frequent rebellions, she is ready for a new, better life.

People have not yet realized that the world will not perish, everything will remain in their places. The change of power, although it touches them, will not destroy, no matter how senseless and cruel it may be. The world will not stop its life, although the transformation will come.

Changes are peculiar to people, even if they are perceived negatively. Everything new is always frightening, but, nevertheless, the new bears in itself something better than it was before. A whole better not to avoid losses, but it is worth taking for granted.