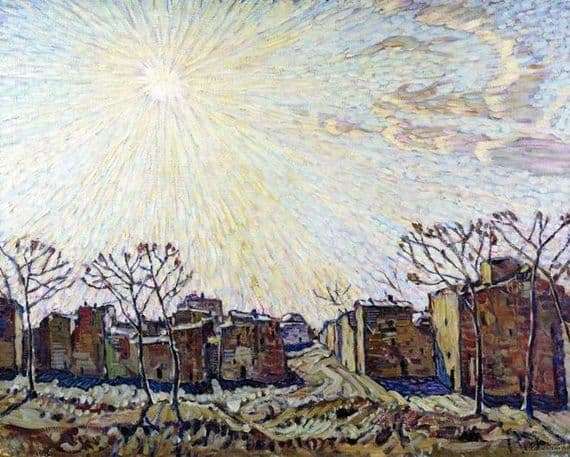 The famous canvas by Konstantin Bogaevsky “The Sun” reflects the theme of the earth on which sinners live, and of the sky, which is capable of punishing atrocities. The artist has depicted the scorching sun, which sends incineration rays to the earth, making it clear that life on the sinful earth is not eternal. The images of the Russian landscape painter Bogaevsky are harsh, and the author’s thinking has a planetary scale.

In the landscape landscape “The Sun”, painted in oil on canvas, Bogayevsky displayed the state of his soul after the 1905 revolution was defeated, and the bright hopes of Russian intellectuals were doomed to death.

In this picture, the artist refers to ordinary urban buildings that are so close to man. The composition of the canvas is built on the image of the Old Theodosian quarters.

In a unique landscape depicts a deserted street. People left the city, leaving the house empty. Only a few thin trees brought to the forefront of the picture cry out to the sky for help.

Old lifeless houses are a little scary and disturbing, and the sky crushes with its scale. The sun seemed to hypnotize the city streets. The contemplator of the picture has a feeling of loneliness and sadness. In the image of the landscape one can read the tragedy of the past days and the attitude of the artist to what was happening. Bogayevsky, imbued with the mood of the era, depicts a city that outlined his fantastic imagination.

In his work The Sun, the master pen clearly changes the style of writing. A special place he assigns decorative graphics and saturation of the picture. Assigns in his work a non-secondary role and the contours of buildings. All the lines that limit the size of buildings, the artist created a contrast of shades, without using transitions in the color scheme or some softening details.