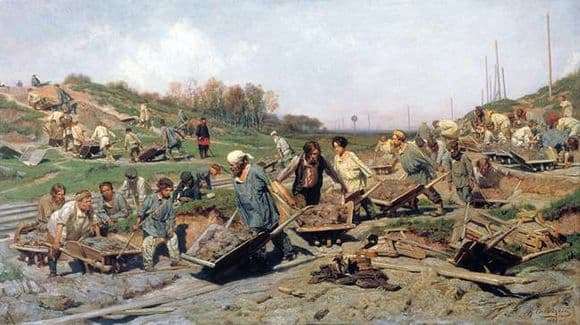 The work of Konstantin Apollonovich Savitsky “Repair work on the railway” conveys the working atmosphere of ordinary people, the device of the life of those years.

Some excavation work is being done on the separated plot. In the process of building involved more than a dozen people. At first glance, the accessories and tools are quite primitive: pick, shovel, car, so people have a hard time. A typical weekday full of labor is all that we see on the canvas. In addition, in the background you can see a beautiful landscape by which you can judge that the work is done in the countryside.

Turning to a more thorough study of the work, you can see that workers either repair something or expand drainage ditches. The characters of the picture are exhausted by their hard work, the viewer often wants to feel sorry for them or sympathize. The author wanted to demonstrate and focus on the burden of labor of ordinary peasants.

The place where the artist was inspired to write his work has long been known: the Kozlova-Zasek road station of the Moscow – Kursk railway in the Tula province. For days Savitsky worked on etudes to vividly depict the slave labor of the peasants. The size of the canvas is commensurate with the efforts of the workers – 103 × 180.8 centimeters. Savitsky made no less effort than his heroes to regain the desired.

In the picture, the artist highlights some of the images: a muscular man with a white scarf on his head, a moody mustache with dark hair and a very young boy barely holding the wheelbarrow in his hands. On the gravity of the cargo says right wheelbarrow, which is broken.

At this time, the creation, written back in 1874, is exhibited in Moscow at the Tretyakov Gallery.