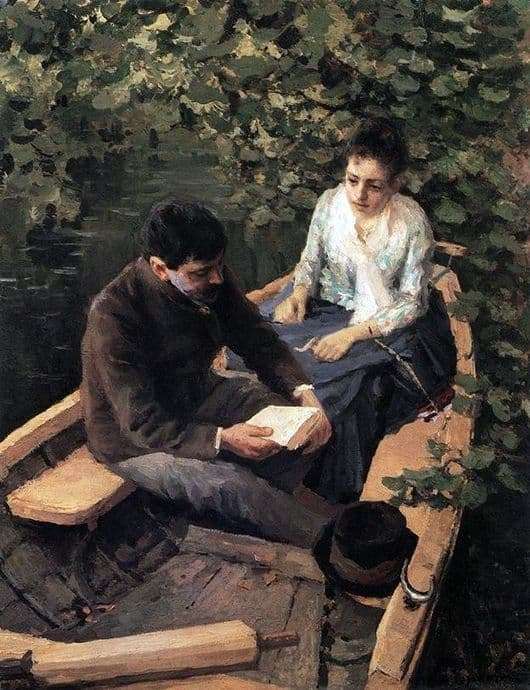 River boat trips inspired artists to create masterpieces. Konstantin Korovin, who portrayed himself in the boat of a beautiful lady – the sister-in-law of his friend, the artist Polenov, was no exception.

Who happened to be in these regions on the Klyazma River, and the action took place in Zhukovka, he was probably fascinated more than once by local landscapes. This is near Moscow, the modern city of Korolev, in which these reserved places have so far remained virtually untouched. Here and today, albeit rarely, but you can meet people who ride along the water surface on a boat. But the artists on these shores appear often.

In the same way as in the picture, the greenery hangs over the water, and you can hide in its shadow. Similarly, the characters did the canvas. The young man reads the book out loud, and the girl listens to him carefully, very emotionally reacting to what he learns from the book. The heroine even pulls the rope with her fingers, in all likelihood, designed to moor their light vessel.

The girl has a light blouse and a white scarf, and this makes her the main focus of the picture, which is generally kept in dark colors. River water, which does not get sunlight, seems almost black, if not reflected in her green.

The young man is dressed in black pants and a brown jacket, with a hat next to him, also dark, and the book in his hands is another bright accent of the picture. The conflict is contained in it, in its narration, but the couple reading the book looks like a single whole. Both people are covered by the same experiences. A beautiful summer day contrasts with them, as if the boat separates lovers from everything else.

So it was conceived on purpose or the artist felt this complex conflict intuitively, it is unlikely that he can be known now. But if it were not for him, there would not be so much emotion and movement in the picture.