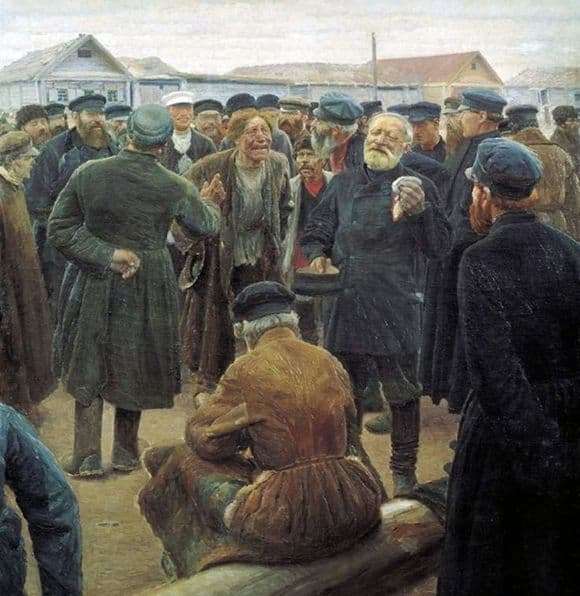 To argue “on the world” in the village meant – in the presence of all the villagers. It was not so difficult to gather all the people in small settlements, but it gave everyone the opportunity to speak or intervene, and also stopped the possibility of false rumors about who was to blame and who was right. Everyone could make their own arguments and, if the arguments were good, emerge victorious from the argument.

But it was only theory. The painting depicts a peasant gathering, which was convened for the sake of a dispute between a classic, almost fabulously archetypical couple – a poor man and a rich man. The poor man looks unattractive and causes some kind of disgusting pity for him – his hair is disheveled, his face is crooked, red from tears, his clothes look old and torn – in despair of proving his truth with reasonable words, he can no longer stop shouting out meaningless accusations.

rich man seems to be his complete opposite. He is well dressed, neatly trimmed. His face expresses some confusion, as if he is perplexed – he is perplexed in public, so that everyone can understand what this loud, shrill person wants from him. But his confusion looks condescending and somewhat feigned. He is trying very hard to portray her, but he and disgusting and boring excuses. It would be easier to pay.

Around the crowd of people. The poor man is held to not rush, a couple of people look at him in surprise, incredulous, someone openly laughs behind him. The rest are indifferent – they stand, because it seems to be an amusing act. Why not stand here, if it is snowing elsewhere and there’s really no place to go?

In the foreground on the log sits an old man. In an infinitely tired pose, hanging his head helplessly – he expresses the meaninglessness of the struggle. The fact that when the picture was only conceived was a local dispute, in the final version is a reflection of the eternal conflict of poverty and wealth.