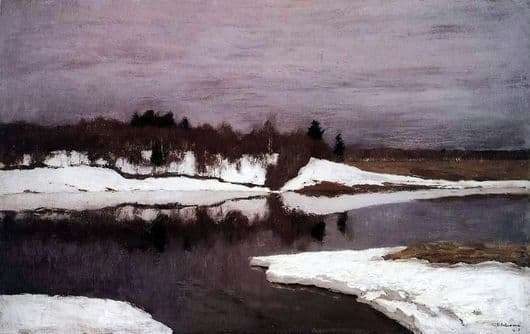 Pictures of the great artist Levitan always very vividly and vividly perceived by the public. Not spared, and approval of the picture, entitled “Early Spring”.

In this work, the particular mood of emotions to which the Russian people are most exposed, with its perception of the world and a subtle sense of nature, is clearly expressed. At the same time, it is worth noting that this picture is made in a very high artistic quality.

Some critics even noted this modern painting, the highest level in the world.

The picture is incomparably an act of unique penetration and sense of nature. With regard to technical performance, then undoubtedly, Levitan is one of the greatest representatives of technical excellence.

The master in this landscape not only conveys the beauty of his relatives and familiar places, but also covers in general all the beauty of Russian nature. This is largely due directly to the mood of the master. In confirmation of this, you can even give an example, when the artist was in Yalta for treatment, but this did not bring him relief, since all the time Levitan yearned for his native places.

Early spring was captured mainly due to the fact that the artist tried to capture every moment of nature, in its various states. Due to the fact that Levitan did not like very much, this inevitably approaching eternity of existence, on his canvases, very well it turns out to see and feel the instant experience of nature and the artist at the time of writing the picture. The snow begins to give way in the struggle for the fertile Slavic lands, but at the same time a large part of the land is covered by it.

In the river you can see reflections of trees that have not yet had time to acquire foliage. The picture evokes a certain sadness because of the damp and cold, which is depicted in it, but at the same time, the approaching spring is good news.