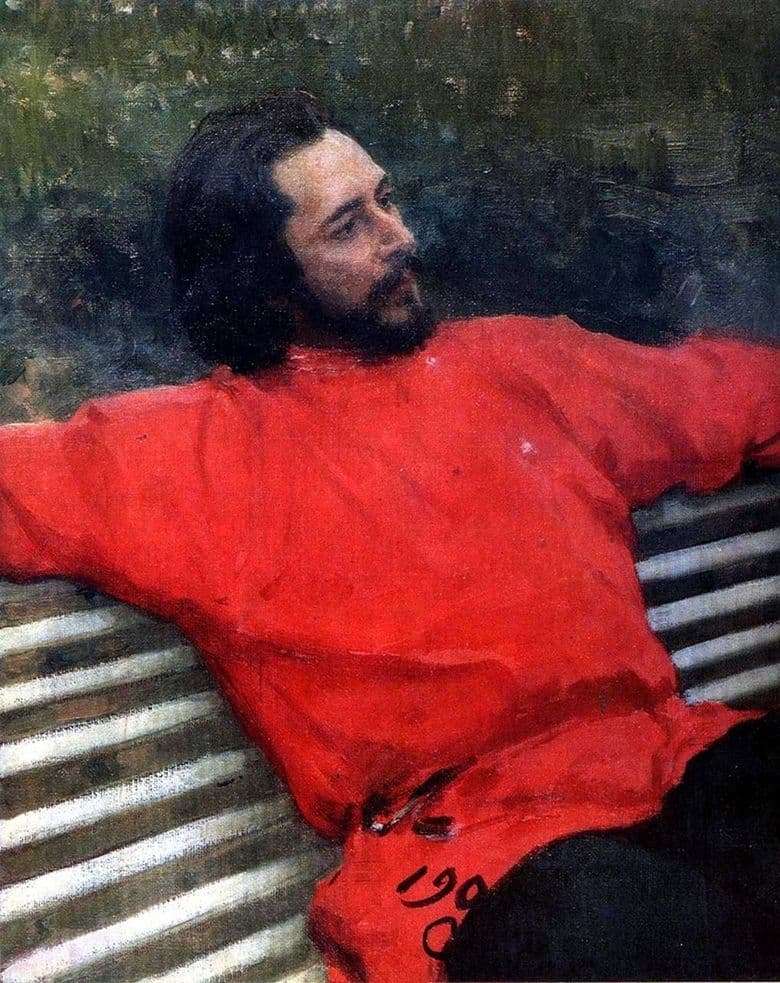 The painting “Portrait of Andreev” is a portrait depicting the famous Russian writer Leonid Nikolaevich Andreev.

The second name of the work – “Summer holiday”. The artist intends to come up with this, second, name, to confuse the audience. At first glance, it seems to us that the canvas depicts a man who sits relaxed on a bench somewhere in the outback of a garden. A warm summer day, the sun is shining. Around – lush, green vegetation, with a scattering of small white flowers. But this impression is deceptive. The painting was written back in 1904, when the modern trend dominated the world. Repin also did not stand aside and, inspired by the rebellious movement, embodied in this work the whole revolutionary spirit of a generation.

Before us is a portrait of Leonid Andreev. First of all, the man’s clothes stand out in the picture. A red shirt that looks like a bloody stain against a background of green grass. The author intentionally uses the scarlet color to convey the state of mind of the person being portrayed. The writer Andreev was known as a bold, unruly man. He embodied the chaos of the world. A blood red shirt is a reflection of his inner world. Particularly interesting is the contrast between the red shirt, snow-white shop and greenery in the background. Despite the fact that the writer is sitting, you can feel the movement, the energy emanating from the picture.

Separately, you should pay attention to the face of Andreev. His gaze is far away, thoughtful, but dissatisfied. Visible internal struggle, tension. Andreev’s facial features also tell us about his strong, strong-willed character – a straight nose, a sharp chin, a broad forehead, and tight lips. Sitting posture also tells us about the drama of the image. The face is turned slightly to the side, the arms cover the entire length of the shop.