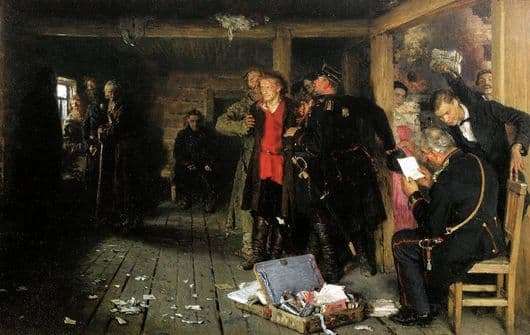 For the first time, the artist conceived to write this picture after he had to witness the massacre of “national criminals.” As you know, these people were not criminals at all, they just did not want to obey the authorities. Later this court was named “Process 193’s”. These events took place in St. Petersburg in 1878.

The final version of the picture “arrest of the propagandist”, which Repin began writing in 1880, appeared only a few years later. The artist constantly refined it, believing that she lacked something. He made all the changes due to the fact that he wanted to achieve maximum honesty and truthfulness of the picture.

In fact, it turned out very real. Repin singled out the main character by using a variety of artistic means. His bright red shirt contrasts with the surrounding background. Likewise, his thoughts, attitudes, understanding of life are also different. He sees the surrounding reality is not as all those who arrest him. He is a true revolutionary with progressive views and ideas. Located propagandist in the center. Due to this, the artist skillfully noticed his gaze. The revolutionary looks very sternly at the man, located near the wall. In his eyes is hatred towards him, but he is not afraid. He is very calm. It is this calmness that underlines the fact that the prisoner has unbending will and strength of mind.

All others do not worry about how the fate of the hero will develop. The gathered crowd just looks with interest at how the events will continue.

“The arrest of the propagandist” refers to the “People’s” series of works by the artist.