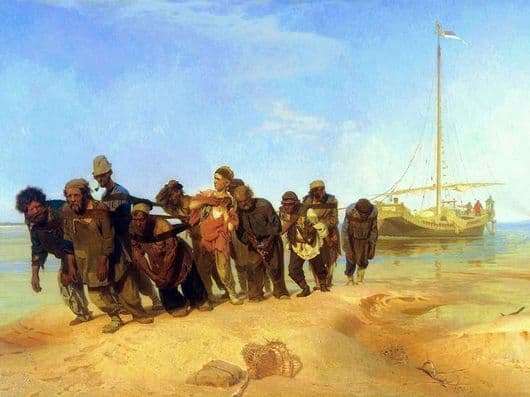 One of the most famous creations of I. E. Repin – painting “Barge Haulers on the Volga”. Before writing this canvas, the artist traveled first along the Neva and then along the Volga. The birth of the masterpiece was preceded by the writing of etudes devoted to barge haulers and their portraits. The painter’s acquaintance with the people of this difficult profession took place in 1870, and three years later the picture in its final form was born.

The first impression of the canvas – a group of exhausted people under the hot sun pulls the barge, overcoming the power of the flow of the great Russian river. There are eleven people in the team, and each of them pulls a strap crashing into the chest and shoulders. For torn clothes, it becomes clear that only extreme poverty can push a person to such work. Some barge-haulers have shirts so shabby that the strap simply wiped them through. However, people stubbornly continue to drag the ship.

If you look at the characters separately, you can see that everyone has their own character. Someone resigned at all to a difficult fate, someone philosophically calm, because he understands that the season will end, and with him – hard work. But then the family will no longer need it.

The composition of the picture is built as if the haulers are going to meet the viewer. However, pulling the strap people do not close each other, so you can see that one of the characters lights up while the rest take over the load. Nevertheless, all participants in the crowd are calm, apparently due to great fatigue. They will react to a friend kindly, with the understanding that he, too, needs a little rest.

The young barge hauler, stretching into growth, does not seem to have calculated the strength, and is now too exhausted to properly lay down on the strap. Only the central character continues to walk with skill. This is an old barge, apparently – the main one in the crowd. He already knows exactly how to calculate the force, so he steps exactly. In spite of the heat, he is wearing thick clothes, as he knows that his light shirt will quickly wear out on such work. His look reflected both fatigue, and even some hopelessness, but at the same time – the realization that the road would still take the road.

It must be said that many people reacted critically to the picture of Repin, but time put everything in its place: hardly anyone remembers the names of critics now, while more than one generation of our compatriots know about Ilya Efimovich from school.