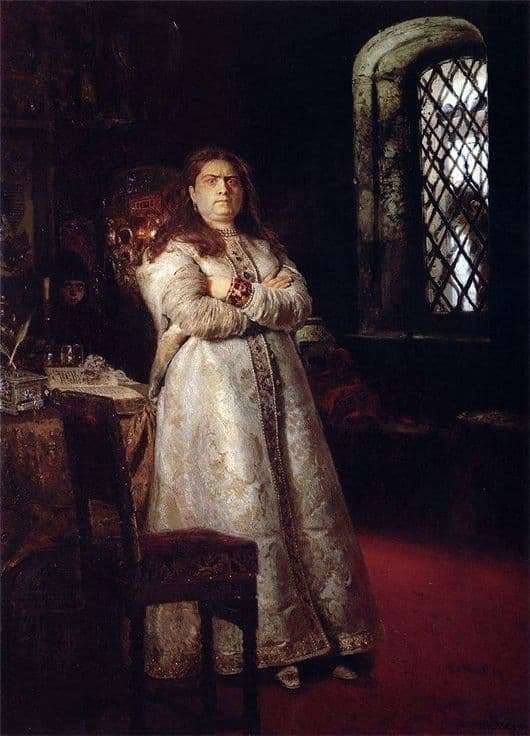 The painting “The Princess Sophia in the Novodevichy Monastery” was the first work of I. Repin on historical topics. It was written in 1879. The plot is based on real events of 1698, when a rebellion was raised against Peter I. It turned out that Sofya Alekseevna, the elder sister of the ruler, was to blame for everything. She was sent to the Novodevichy Convent as a punishment for her deed.

Repin’s idea was to convey as much as possible the drama of a strong woman who was imprisoned. This is evident not only in her posture, but also in her facial expression.

The artist depicted the overthrown princess in full growth. Real masculinity and power were able to be expressed in a somewhat “manlike” figure and arms folded on the chest. Characteristic, which gave Kramskoy this picture, is considered one of the most accurate: “Sofia Alekseevna looks like a tigress, which they caught and locked in an iron cage.”

Most of the time the artist spent on the face of the princess. Tight lips, bulging eyes, eyebrows angrily shifted. In addition, if you look at the picture, you can see the contrast between unkempt hair and beautiful, expensive clothes. All this points to Sophia’s inner turmoil. He embodies fear. And in order to demonstrate this clearly, Repin also portrayed a frightened nun, squeezed into a corner.

All other details of the picture were created in order to emphasize the main image. Dark lighting, discreet interior, shadows, grilles. All this creates a strong psychological tension, which conveys the general mood of the artist’s work.

“Tsarevna Sophia” is considered the heritage of world culture. Repin’s debut in the historical portrait is still considered one of the most prominent among the artists of that era.