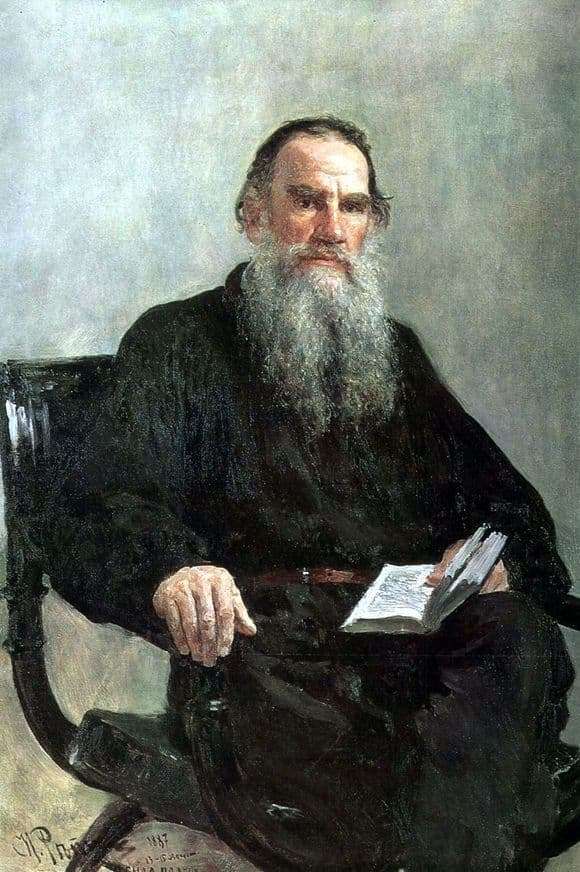 For many years, Tolstoy and Repin were tied by a gentle warm friendship, despite the fact that on many issues they did not agree completely and often heatedly argued, causing others to feel that they were quarreling. In fact, when encountering points of view, friends found a common solution, got to know each other better, or simply practiced wit, thus entertaining each other.

“Portrait of Tolstoy” – one of his many portraits, written by Repin. It is natural for any artist to write close people, and Repin was no exception. He portrayed Tolstoy in the chair, at the time of reading, relaxed reverie. Most likely, having seen an interesting position, which, in his opinion, expressed the inner essence of the writer, Repin asked him to take it again, in order to sketch it and preserve it for centuries.

In the picture, Tolstoy sits in an armchair, one of his hands lies on the armrest, in the second he holds a small book. He is dressed in a black blouse, intercepted at the waist with a belt – against her will she is associated with the robes of a priest. A broad white beard lies on Tolstoy’s chest. His eyes are looking a little away from the viewer – the writer has just raised them from the book, and in them a certain question shines, reflecting on which he interrupted reading.

Perhaps, at that moment, when his posture was moving and alive, and no one had yet thought about the picture, he turned to Repin with a question, but in the portrait his thoughtfulness was not resolved, it was enclosed inside. The background of the picture is blurry, it does not play a role in the fate of the shown personality – it can be a garden, a living room, and a veranda, which, as superfluous, Repin simply did not show.

Only Repin managed to write Tolstoy. With undoubted respect, attention to his personality, with drawing details – to the smallest hair in a beard. So you can write only a friend, but not a casual acquaintance and customer. And the question that shines in Tolstoy’s deep-set eyes may have found the answer in Repin.