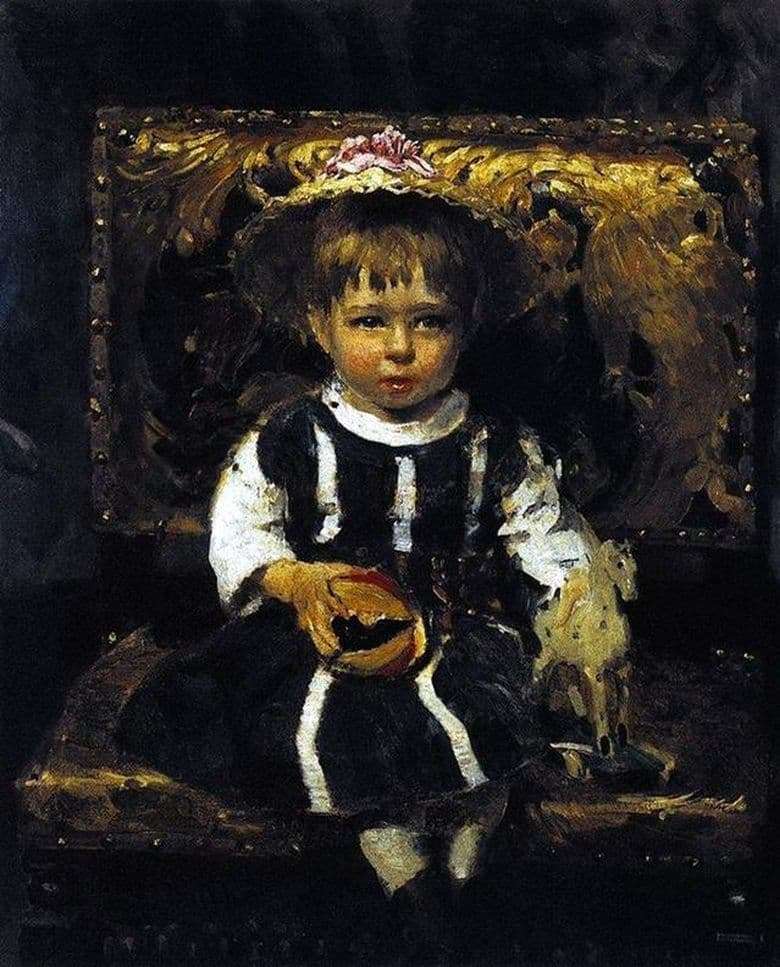 Ilya Repin painted more than one portrait of his beloved daughter Verochka, but this masterpiece is the most famous. The image of a charming little girl in a chair with gilded ornament imprinted in the hearts of millions of people from different eras.

The beautiful baby is depicted sitting in a large armchair decorated with a gold ornament. At the top of the chair, the ornament glows more brightly in gold, which hints at the material from which the furniture is made.

An elegant wicker straw hat with a pink bow at the top is placed on the head of the girly. Most likely, the hat is worn on the head in order to hide the short-haired hair of the artist’s daughter, otherwise it could be mistaken for a boy. The face of the Faith illuminates the big dark eyes, the look is very serious. Apparently, her daughter very carefully posed for her father to write a picture. Ruddy cheeks and scarlet lips stand out very harmoniously on the face of the child, consecrated by the golden glow of the lamp.

The girl is wearing a ceremonial black dress with several white stripes on her chest, a white collar and sleeves. White tights and neat black shoes, almost merged with the background, complete the composition. The child holds the golden ball with the right pen and the wooden horse with the left.

The girl looks very obedient and neat, most of these features are traced not so much in the pose and clothes of the child, as in a meaningful and not childishly reasonable look. Later, the artist will draw a whole series of portraits of his beloved daughter, according to which we will be able to find out how the girl changed every stage of her growing up. However, all these canvases are united by one common feature: the character of the girl, her sharp mind, fun and wisdom are traced in each picture, starting with the images painted at such a small age.