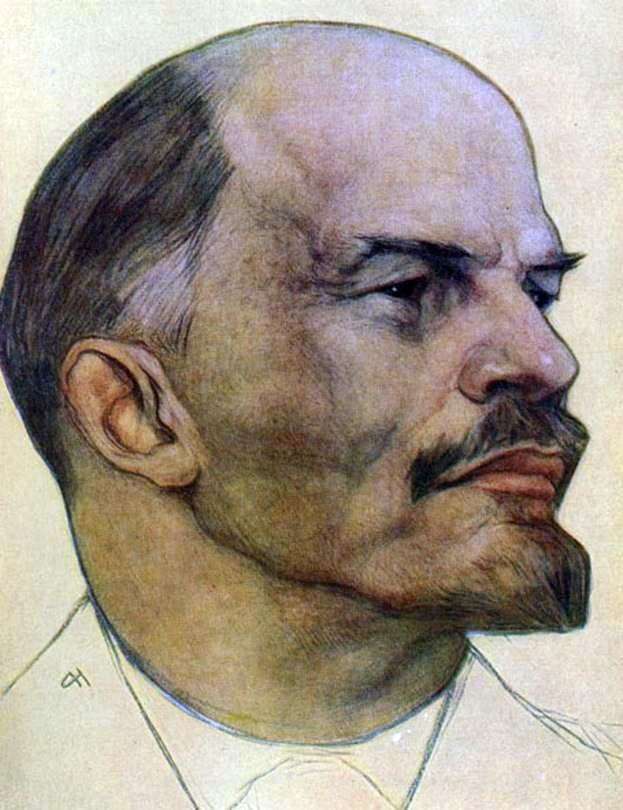 Portrait of the great Russian leader “V. I. Lenin “was written by artist N. A. Andreev in 1922. The author of the picture was inspired by the image of Lenin, the strength of his personality, unbending will, and an incredible oratorical gift. Lenin led hundreds of people behind him, and Andreev was no exception, having written many of his portraits.

Unlike most artists who prefer to depict Lenin in black and white colors, the author chose warm beige tones for his work. The portrait does not look as sharp and aggressive as other similar paintings.

Lenin is depicted with his head held high, with a stern and resolute look. Strong emphasis is placed on the face, which is highlighted by elaboration and detail, while the background and clothing remain monotonous. Frowning thick eyebrows, pursed lips, strong-willed chin – the artist skillfully conveys the image of an inflexible personality, but at the same time does not depart from the original and cannot be improvised. The great Russian leader looks at his state and leads the masses. The desire for control and general order is felt at first glance thrown at the picture.

It is noteworthy that Andreev used contours, as if by all available means he tried to show the “incompleteness” of the drawing. Painting style does not differ strong realistic and volume. Perhaps the artist specifically wanted to present this picture as a kind of non-existent symbol of rigor, discipline and iron will, and not convey with the help of paints and canvas a living person with his weaknesses and problems.