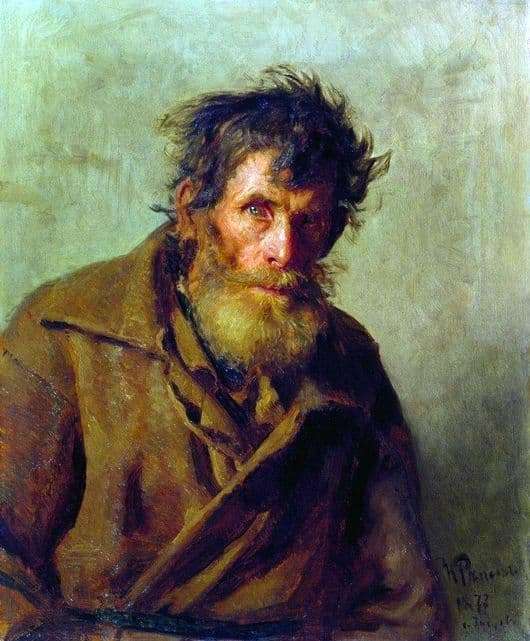 This painting by Repin is one of the most famous canvases of the artist and has the name “Peasant of timid”. This portrait is the most reliable example of the psychological portrait of a Russian person.

Thus, it is possible to state with confidence, looking at this image, that it is quite clearly prescribed to the artist exactly 2 subject lines. It is worth noting that at first glance, this man may seem timid, indecisive, wilted under a heavy burden and stooped to carry his cross, but in fact this man is still very strong and not broken and very strong inwardly and in his spirit so much that capable of some kind of rebellion.

This portrait shows a kind of warning to all viewers that there is a Russian spirit in it that can explode and burst out into an unbridled protest that cannot be stopped. The portrait is amazing even with its name, in spite of the peasant himself, who is a little messy with an unkempt beard.

The posture itself may indicate that he is somewhat unsure of himself or clamped, but this can be said only about his posture, one has only to look at his glance and everything will immediately become clear. In his eyes is seen a whole storm of unbridled passions, crazy power of energy. This glance betrays a rebel in him, and timidity is in fact exclusively feigned, for the sake of appearance.

It is worth noting that the artist surprisingly qualitatively conveys the brilliance of his eyes, and thanks to the traced wrinkles, one can understand the rather complex fate of a peasant who told some wisdom. A red beard only emphasizes the robber nature of this man, so the artist was able to perfectly show all the secrets of this image, which can be easily guessed by high-quality emphasis on them.