Home ⇒ 📌Repin Ilya ⇒ Description of the painting by Ilya Repin “Portrait of V. I. Repina, the artist’s daughter” 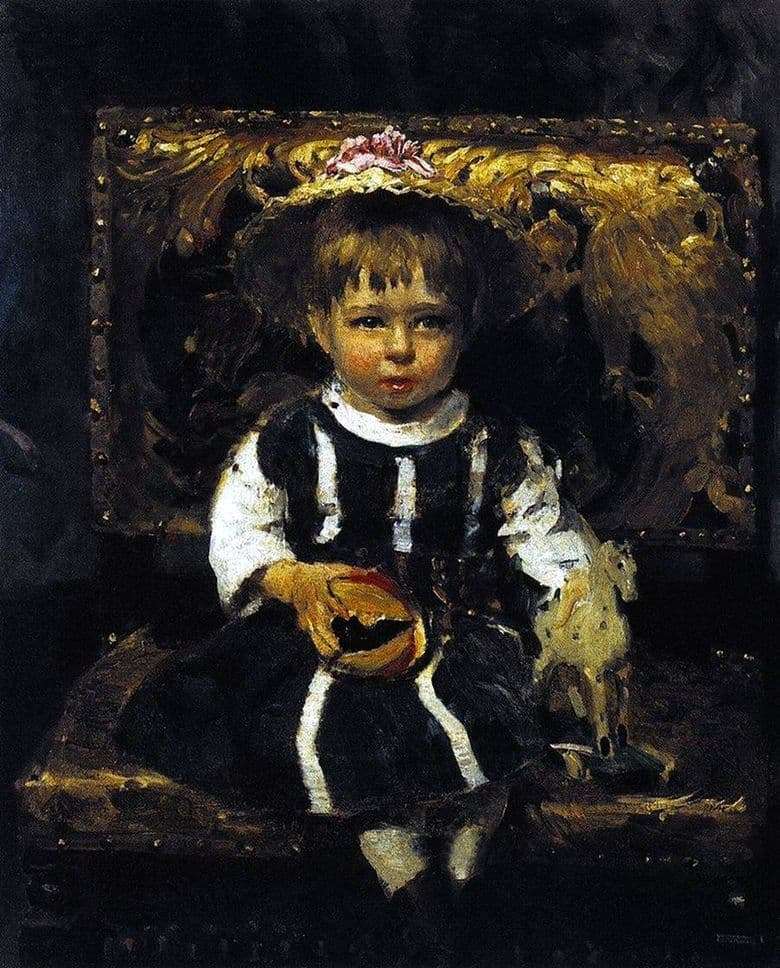 Ilya Repin met his first wife Vera when he was nineteen years old, and his future wife nine. They got married a decade later, and four children were born in this marriage. The eldest daughter was also named Vera; she was the favorite of the artist. After the parents divorce, the girl, unlike the younger offspring, stayed with her father; being an adult, she served for several years at the Alexandrinsky Theater, and then moved to her father in Finland, in the Penates.

There are several portraits of the artist’s eldest daughter, made at different times, but the most famous, no doubt, is the portrait of the little Vera in the gilded chair. The baby is depicted in a feminine hat with a flower; if it were not for the hat, then she, shortly sheared, could easily have been mistaken for a boy. The child’s pretty concentrated face is very serious; the girl diligently poses to her father, apparently, at his urgent request. In the hands of Vera toys, a ball and a wooden horse, which she squeezes tightly.

She is wearing an elegant dress, black with white stripes, white sleeves and a collar; White tights and black shoes complete the picture. A neat and obedient girl in ceremonial clothes on this canvas is just a sample of the “ideal child.” The portrait is photographically accurate; Considering the later works of the artist, which depict the same model, we can see how the artist’s daughter grew and transformed.

Despite his constant employment, Ilya Efimovich tried to give his children as much attention as possible. He even tried to teach them painting; but only Vera, who diligently imitated her father, succeeded in drawing. The girl grew up in a cheerful, energetic girl and, according to contemporaries, it was she who was the soul of the Repin family. Only with her Ilya Efimovich could talk on an equal footing, as with an adult.