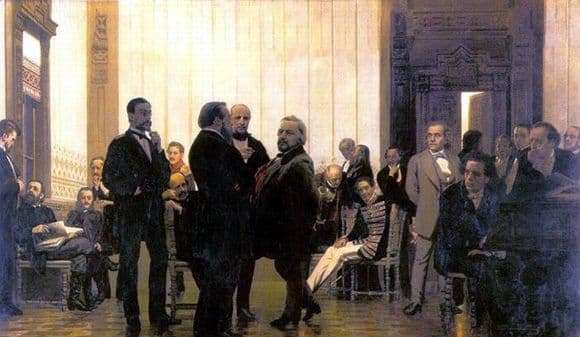 Here is a group portrait of Slavic composers, written by order of one of the most successful entrepreneurs of Moscow of the nineteenth century – Porokhovshchikov. Ilya Efimovich Repin – an outstanding artist who took up painting at the very peak of Slavophilism – the flow of literary and philosophical thought, focused on emphasizing Russian cultural identity, a sharp difference from the Western world.

The so-called Slavic Brotherhood of Composers is depicted on Repin’s canvas. It is known that Vladimir Stasov provided some assistance to the recently graduated Imperial Academy of Art Repin, he selected suitable portraits of deceased composers, or those who for some reason could not take their own part in posing for the artist.

Most of the work on the group portrait was held in St. Petersburg, but the canvas was already finished in Moscow, now the canvas is stored in the state conservatory of the capital. Among the portrayed can be noted Mikhail Glinka in the foreground, with a squint looking directly at the viewer, next to him Mily Balakirev, Vladimir Odoyevsky and Nikolai Andreyevich Rimsky-Korsakov. Behind the group of the first plan, you can see Alexander Dargomyzhsky, and behind him – Ivan Fedorovich Laskovsky, to the right of the composer – Alexey Fedorovich Lvov in full uniform, listening to the speech of Alexey Verstovsky.

At the piano, you can watch brothers Rubinstein, Serov. The group in the “depth” of the portrait is formed by Gurilyov, Bortnyansky and Turchaninov. The background is formed by Frederic Chopin, Oginsky, at the door – Lipinsky. The left side of the portrait forms the group of composers of the Czech Republic – Napravnik, Smetana, Bendel and Gorak. This choice of composers is dictated, primarily by the personal musical preferences of the customer, and most musicians are painted from their portraits.