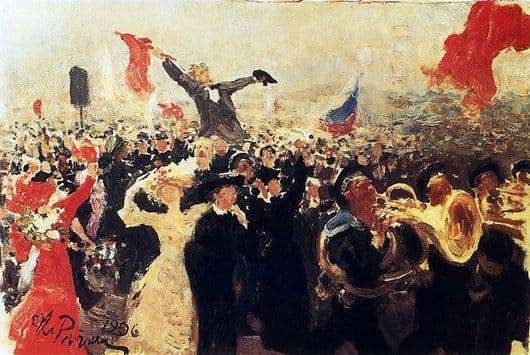 Ilya Repin is a great Russian artist. He is well known to the public from school, but very few people know about such work as the “Manifestation of October 17, 1905”. The artist painted the picture in 1907, in response to the manifesto of Nicholas II of October 17, 1905. Repin himself spoke about his work, that this “… the movement of the Russian progressive society… on the area of ​​a large city in the ecstasy of general rejoicing.”

All those who lived in St. Petersburg at the beginning of the twentieth century talked about the picture that it very accurately conveys the excitement and mood of the crowd.

The canvas depicts the Russian intelligentsia – philologist V. Prahov, actress L. Yavorskaya with a bouquet, critic V. Stasov and people who come with flags and banners. The artist seemed to stop time for a moment, he managed to convey the mood of the public, caused by new government reforms. In his images there is no deceit, the author very accurately wrote out the character of the demonstrators.

The work shows fashion: young ladies in hats, men in military uniforms. This detailed elaboration of the foreground allows the viewer to see, feel the spirit, the atmosphere of that restless time. Repin was able to deeply realize the whole essence of the revolutionary protest and capture it in his film “Manifestation”. The task that the artist set for himself is to convey the mood of the crowd, so the picture radiates strong emotions.

If you look at the compositional composition of the plot, then, apparently, the typical influence of post-impressionism on the master’s hand. I would like to draw attention to the broad strokes, careless style of writing, bright colors, picturesqueness and dynamics of the line. Repin could easily become an artist of a different style and composition. Not that he wanted, but rather time and society dictated their own rules. Creative people were constantly under strong pressure, especially in the first half of the twentieth century.