Home⇒
👍Repin Ilya ⇒
Description of the painting by Ilya Repin “What a space!” 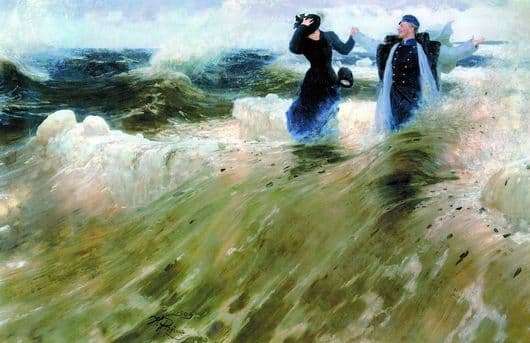 As the artist himself admits, a passing impression served as the vital material for this picture. One day, while in Penaty, in his estate, Repin saw how a young couple – a pretty girl and a high school student – was taken by the sea wave by surprise.

The girl somehow tried to defend herself from the elements, but the young man, completely disorderly from the raging sea, read something by heart, proudly and slightly arrogantly opening the chest to the wind. Their mood fully corresponded to the agitated sea. The endless fun of these two people, happiness, a sense of youth and eternal love of life Repin chose the plot for the canvas. Joy and enthusiasm blows from this picture, as, indeed, from many other works of the artist.

For a long time, critics did not want to relate this canvas to the great “Ivan the Terrible” and “Zaporozhtsy”. Like, and the topic is too frivolous, and these ridiculous impressionistic experiments are inappropriate in their declining years. And when they saw that the student, it turns out, the white-haired one, that is, the wealthy and completely indifferent to the politics of the estate, became completely embroiled. Fortunately, not all art lovers held this view.

The most perspicacious realized that the scene itself was not important, but the feeling that it expresses. Recall that the picture was painted in 1903 shortly before the First Revolution. Perhaps, in the elements, the artist intuitively portrayed a premonition of future unrest? And although, as history has shown, not everything was so beautiful and cloudless, Repin, in the form of a high-school student, expressed confidence in people and in life itself.

As for the appeal to impressionism, in the case of this picture, his aesthetics only contributed to a more realistic Repin letter. Accurate, worthy of a marine painter Aivazovsky, the transfer of emerald water outflow, a detailed reproduction of the emotions of a young couple create a unique effect of the viability of the scene.