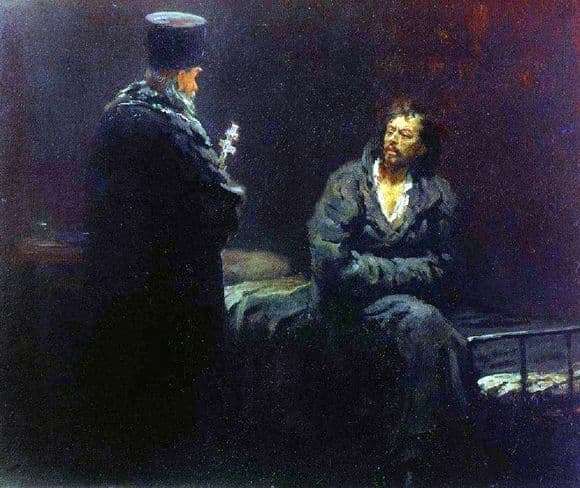 “Denial of Confession” was inspired by a poem called “Last Confession” and was published in an underground magazine where Repin read it. After long and painful attempts to outline a composition, to depict an excellent illustration, Repin departed from illustrativeness and turned to his own interpretation of the plot.

In the poem, the priest is arguing with a revolutionary sentenced to execution. Embittered, feeling right, he ardently answers calls to repent, and with this flame he burns himself.

In Repin, the dispute is replaced by silence. The priest squeezes the cross, preparing to fulfill his duties in the best possible way. He does not admonish, does not persuade, does not ask and does not argue – he is just waiting for what the convict decides, and in general, he doesn’t care whether he repents or curses God with all the curses he knows. This is just a job. In the pose of the priest there is not even interest, not to mention the heat of the preacher.

The revolutionary also does not want to interfere in the dispute. Hot speeches are not about him, he is tired, and he doesn’t see any reason to argue with another cog in the system. He is exhausted. He is wearing a dirty torn robe, a beard and long hair are not cut, they look sloppy. He has been sitting for a long time and still keeps his presence of mind. Turning back from the priest, just raising his chin a little, he with a pose, says “no” with silence, not wanting to repent or preach. He wants just to get behind him and have done everything he should.

The colors of the picture are dull. The chamber is dark and there is practically no light in it. One can see only two figures, frozen across from each other, not pitying each other for anything to convince, and a simple prisoner bed, on which there is nothing that could make it special and belonging to this particular prisoner.

“Denial of confession” is a denial not only of repentance, but also of a dispute, since a denial occurs in complete silence.