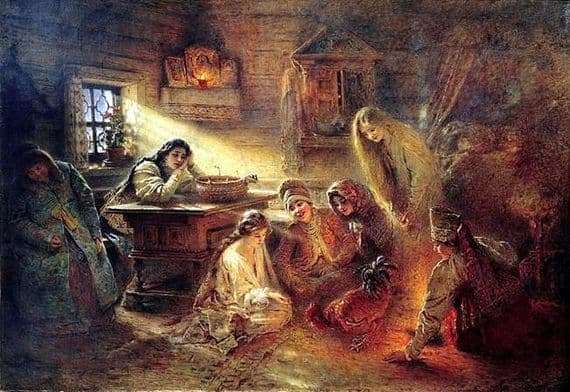 Makovsky – a Russian artist who adhered to the academic style and became famous for his paintings depicting the somewhat idealized Russia of past centuries. Sometimes it belongs to the Wanderers, who opposed his version of the Academy of Arts Academy and who drew inspiration from folk tales and folk life.

The participant of the “riot of fourteen”, when the fourteen best graduate students left the Academy, protesting against an attempt in a large competition in honor of its century, impose one topic on them all and deprive them of their freedom of choice. The son of the artist, the brother of the artists and the father of the artist.

“Christmas divination” – one of his typical works, glorifying hoary antiquity. On it, in a small bright room, the girls started guessing at the suitors. They took grain, water, coins and a mirror, brought a proud rooster with a blue tail and sat down to watch what the bird was going to reach. If the grain and coins – the husband will be rich. If the mirror – beautiful. If the water – will drink. On the faces of the girls cheerful curiosity, everyone is drawn to see what the rooster will choose.

One of them is sitting at the side, at the table, and looks sad. A cup in front of her – perhaps, wax was dripping into her, and this girl had an unlucky prediction. An old grandmother is dozing, although she would have to watch the girlish merriment so that they would not disperse too much. In front of the images in the corner there is a lampad, a pile of pillows and feather beds on the stove. The picture is permeated with light, the faces of the girls glow from inside. They are vaguely alike, like sisters, and all are beautiful in their own way.

One is openly laughing, the other is hiding her face under a headscarf, the third is leaning closer to the bird, her hair is wrapped around her like a raincoat. Auburn, golden, brown – this range draws from the old days, it brings associations with icons written on wood, and is very suitable for a scene from days gone by. A peculiar nostalgia is visible in the picture, as if the artist wants to return to where he has never been before, and the same desire is transmitted to the viewer.