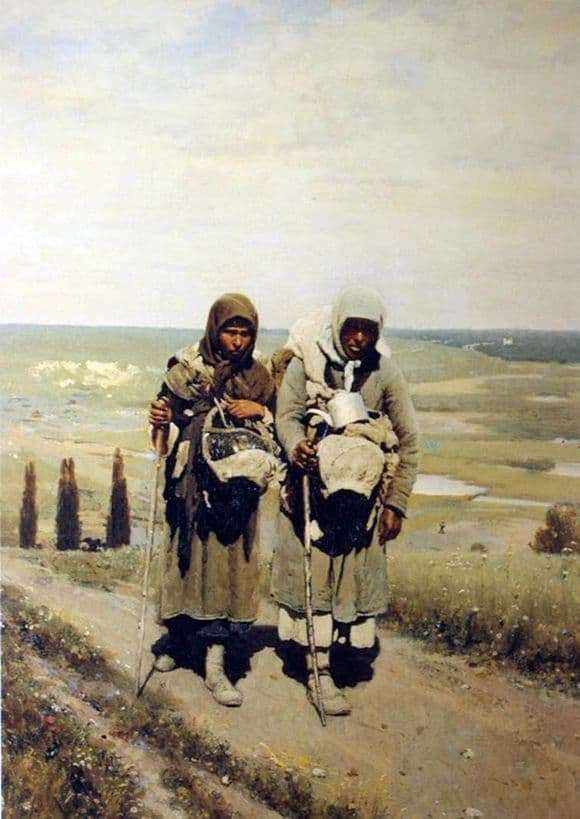 This picture was an etude for a large canvas “The Procession of the Cross in the Kursk Province”, Repin wanted to cover all of Russia, and he succeeded.

Here we see two simple women. They make pilgrimages. It can be assumed that they are going to pilgrims for a long time and very tired. They are dressed very simply.

Repin depicts the endless Russian road. We do not see where it begins. It affects the breadth of landscape coverage. Repin portrayed women in the background of the valley. Right behind them is a green-yellow carpet. Rare trees are seen here and there. The sky, as if burned out. Its color is not blue, but greenish. It seems that the earth merges with it, forming a single space.

Repin pays maximum attention to two heroines. He details the features of their hardened faces. Before us are women who have gone through a lot. They are not afraid of adversity. They survived and were able to move

everything. And now they calmly go on the road, as it is necessary. We do not see discontent on their faces. They are completely focused. It seems that the pilgrims are lost in thought. What are they about? We can only guess. It is possible that about their fate or about their homeland.

Repin is a true master. The picture is dominated by gray, brown and green tones. But despite this, it is quite bright. The artist skillfully combines colors. Everything depicted them as realistic as possible.

The painter deliberately does not prescribe in detail the background and does not specify it. The action of this canvas could occur anywhere in Central Russia. We feel the monotony of the landscape, which pilgrims see every day. At the same time Repin admires nature.

Its relation to the depicted is dual. On the one hand, he emphasizes the poverty of these women and their joyless existence. On the other hand, he seeks to convey the beauty of the vast expanses and pride in his country.