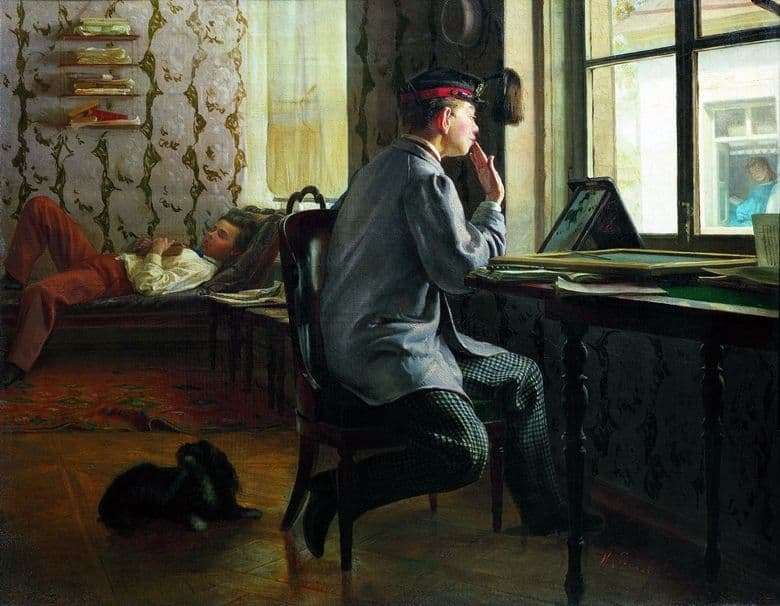 The painting “Preparation for the exam” is one of the early works of the artist. It was written in 1864, when Repin was only 20 years old. Probably in the work we see a reflection of the reality that just surrounded the artist at such a young age.

Before us is a household story. Two boys are preparing for the exam, but preparation is proceeding extremely poorly. The plot unfolds, most likely in a student pension, where the boys lived in several rooms in the same room. One of the students read the book long and hard. But he was tired and bored with this business. Now he is fast asleep on the couch, holding in his hands a little book of some clearly boring book. His pose is relaxed, undisturbed.

The second student, depicted in the first plan of work, is not much better engaged than the first. He sits at his desk. Scattered around the book, items for writing. The boy sits relaxed, his legs dangling under the table. A student’s cap is on his cap. But Repin decided to deliberately emphasize the comicity of the situation, so he attached a small panicle to his cap, which hangs like a broom on the student’s forehead. Near the chair

The background work takes the viewer out of the student room. Ilya Repin depicts very large windows that visually increase the space of the room. We see that there is another building behind the windows. Perhaps this is a women’s college or a boarding house. In one of the windows is a pink-cheeked girl. In a light blue dress, she sits and reads a book near the window. But reading her is much less interested than the young, handsome guy outside the window. She smiles at him.

The picture conveys the spirit of youth, youth. Every detail reminds of the carefree years of student life. The sun is shining, the first birds are singing, the desire to learn is completely lost.