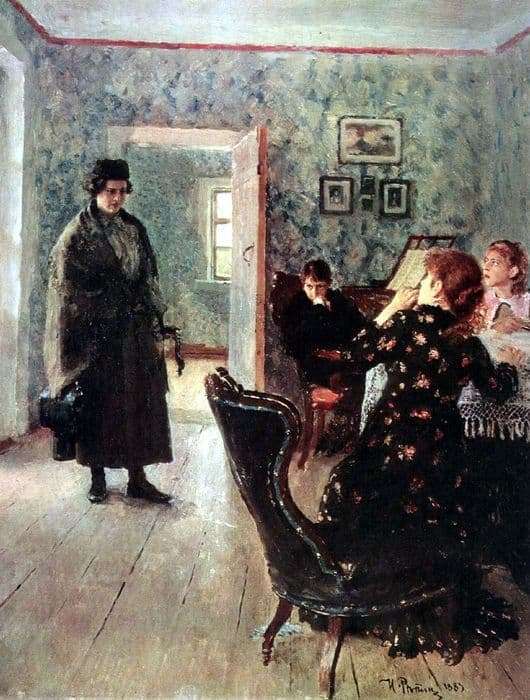 This picture shows the unexpected return of a revolutionary who was exiled to exile. The artist sought to convey a pause that arose between the newcomer and the household.

What is important is not so much the moment of appearance as the moment of surprise, which very accurately turned out to be transmitted on the canvas. This pause is so well underlined that, in silent silence, the family simply does not believe their eyes. This state of shock and faith merged together, emphasizing the significance of this fugitive for people who love him.

Everyone knows quite clearly what will happen next, but the author decided to leave the presentation of these emotions to everyone individually. The look can be considered a prisoner of sadness and fatigue, and a request for forgiveness, prayer and penance sniskhoditelstve.

An elderly woman, rising to meet, peers at the newcomer, in search of familiar to the pain features and

voice, the family features of her son. Still not believing the miracle and not giving up hope, the woman with a trembling hand seeks support from the back of the chair. Dressed in mourning, the woman mentally buried her son, but in her heart she didn’t believe in the soul.

Although the woman is visible from the back, however, this does not prevent us from understanding how much grief caused her to change – gray hair with a flash of white, a slightly leaned figure, drooping shoulders, premature old age.

The others present in the picture are also members of the family, however, this is already the family of the exile – his wife and children, who, not concealing their elation and hope, are preparing to burst into tears, not believing in the return of their loved one. The fear of the little girl is clearly conveyed and, overwhelmed by a feeling of joy, the boy is about to throw himself on the neck of his father.

The image of the wife does show us the genuine story of the feelings and past life of the hero. The woman is depicted pale, exhausted, confused and frightened, but with all this joyful.

In order to clearly separate the exiles and the rest of the family members, the artist depicted him as a darker figure, who, against the background of home comfort, the usual course of life, bursts in like a cold wind in May days. But at the same time, the exiled is not sure whether his family will accept now, when he has become a fugitive and a convict, and whether he will understand the motives that prompted him to go against everyone.

Therefore, the newcomer is standing in the middle of the room, not daring to take a step either in the house or back into the street. There is hope in him.