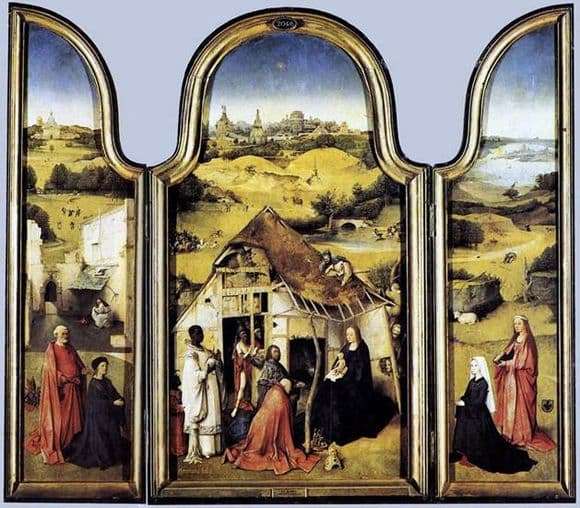 I. Bosch created several triptychs on biblical themes, one of the latter is the “Adoration of the Magi”. The main part of the work shows the main plot. The Virgin is located in front of the house and shows the baby.

Magi imposes gifts to the feet of a woman. The picture shows a moment of sacrifice, Abraham is going to sacrifice his son. Such an event symbolizes the sacrifice of Christ, namely his crucifixion.

On the chest of one magician depicts a scene from the Old Testament. Peasants watch this scene, they look out from around the corner and even climb onto the roof. The artist depicted the Magi, departing from the general rules adopted. Before that, the Magi were portrayed only as Jews.

The peasants do not look so peaceful and harmonious, they even behave arrogantly and with decent wise men look miserable. Attention is drawn to the person standing in the doorway. He is dressed only in a shirt and cape, on his head is a crown, and he looks at the baby hopefully. His face exudes joy, while most characters express animosity.

On the cloth of this character’s clothing are demons, perhaps he is the devil himself, and most of those around him are his retinue. In his hand, this man holds one of the helmets of the Magi, which speaks of his superiority and leading position.

The drawings on the clothes of the dark-skinned king show his belonging to paganism. The sky turns into golden reflections, the artist often uses this technique in his work.

It would have seemed like an understandable biblical scene, but small details speak of evil, which is scattered everywhere. Pictures on clothes, unusual poses of characters, animals and gifts all form a single picture with a deep philosophical meaning.

Animals symbolize the obstacles that await any person on a difficult life path, the struggle against them constitutes the whole existence. The painter depicted many characters and boundless distance, showing the scale of the world and its diversity. All images of the picture are multifaceted, they can not be characterized by certain features.