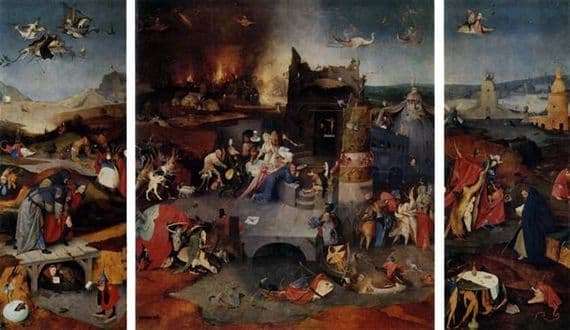 In his work “The Temptation of St. Anthony” Bosch put his soul. His famous triptych is one of the best paintings of the artist. The basis for writing was the plot of the literature of the Middle Ages about how St. Anthony succumbed to the terrible temptations in the Egyptian desert. The original of the painting is kept in the State Museum of Lisbon. In Portugal, the painting turned out to be in 1523: at that time Damiao de Goish, a well-known Portuguese humanist, acquired it. It has a canvas and several copies (there are about 20).

This masterpiece of European painting, created by Bosch, has several components. Thus, in the central part of the triptych, the very “Temptation of St. Anthony “, on the left shutter -” Flight and fall… “, on the right -” Visions… “. On the wings of the outer scenes of the Passion of Christ are depicted.

Fantastic characters crowded central part of the triptych. So, the white bird turned into a real ship with wings, rising to the sky. Most likely, Bosch’s inventions were based on graffiti on coins of the era of Alexander the Great.

In the center of the canvas the rite of the black mass is performed, which testifies to the contradictory moods and embarrassment of the master brush himself. Here women priests rule the sacrilegious service. They are surrounded by a mixed crowd: following a cripple to a sinful communion, a mandolin creature hurries, wearing a black cape, with an owl on its head and a boar snout. In these circumstances, an owl symbolizes a lie, although in other sources it is a symbol of light forces, the so-called God’s eye, which follows the actions of participants in the alchemical process.

Monsters come out of a huge red fruit. Their leader – the devil – plays the harp. In the background is a wizard in the cylinder who controls the actions of a group of demons. At the bottom of the canvas, the artist depicted a floating duck without a head, on the neck of which there is a small window, from which a demon looks out.

The main character of the left shutter is St.. Anthony. He fell from the sky and Antonites raise him. At the top of the sash, the Saint folded his hands in prayer, paying no attention to his tormentors.

On the right casement, Antony is presented to the viewer as a knight of firm faith who defeated evil forces.

The great painter Bosch believed that alchemists were real heretics. The master of the brush tried very hard to reveal to the viewer how much the Alchemists misinterpreted the Bible with their heretical thoughts.