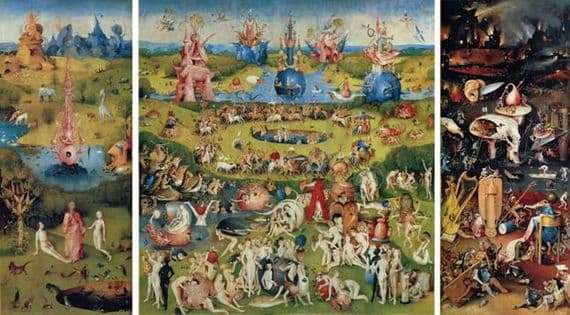 This painting is the most famous triptych by the Dutch artist Jerome Bosch. The reproduction is so called due to its central part, which is dedicated to one of the sins – lust. The modern name of the picture was given by researchers. To this time, a clear interpretation of the picture does not exist.

The main feature of the triptych is that the artist tried to convey his ideas through many small details. The picture itself consists of three parts: the left casement, the central part and the right casement.

On the left casement is the period when the world was created. Heaven and Earth gave life to dozens of animals. The center of the composition is filled with the Source of Life – a tall, thin, pink structure. In the foreground, the author decided to show the world before the flood, and also portray the scene of how Adam and Eve were tempted and expelled from Paradise.

The central part is considered the idyll of Bosch. It depicts a garden inhabited by nude men with women. Their main occupation is the collection of food and a variety of games with love joys. You can see a pair of figures that fly through the sky. In addition, huge plants deserve special attention. Everything together creates the impression of innocence and simplicity.

On the right wing, or as it is also called the Musical Hell, are depicted dead musicians with their instruments. After a thorough examination of this part of the picture, it becomes clear that the author wanted to convey in this way a nightmarish reality.

In the picture you can see a variety of transparent figurines, fantastic buildings, monsters and hell cartoons. Some scientists put forward the theory that with the help of the picture the author tried to depict the life of a person, in which there is an image of true love and a celebration of voluptuousness. Doubts are caused only by innocent and detached figures, as well as the positive attitude of the church to the picture.