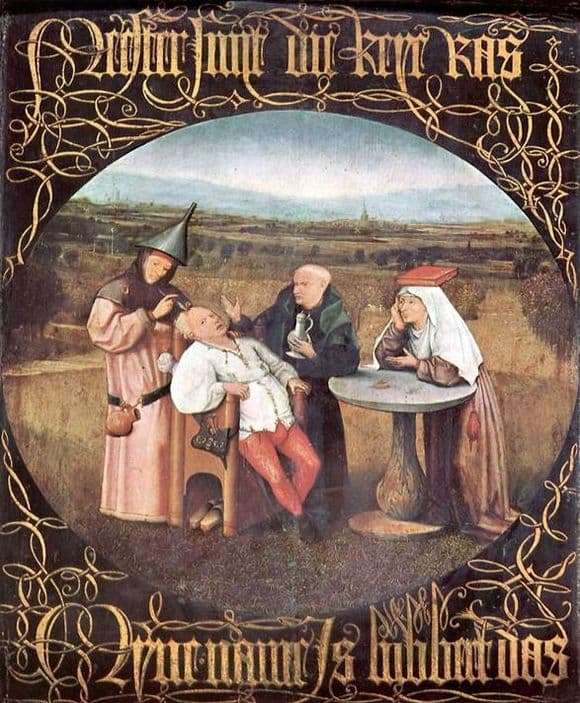 “Removing the stone of stupidity” is one of the earliest works of Bosch, which has reached our days. At first glance, according to the overall composition and name of the picture, the main purpose of writing becomes immediately clear – the motive of stupidity.

If we talk about some kind of pictorial attitude, this work is still far from a pictorial understanding of the painting. You can also find a large number of anatomical errors.

Separately, I want to say that the work was done in monochrome, slightly reddish shades, because of which the whole composition looks a bit dryish. The situation is difficult with the landscape that is in the background, it is rather stingy with events and poorly designed.

But the meaning of this picture is not in it. In this case, here the semantic load on the viewer is in the first place. The work very clearly conveyed the idea of the artist, which is immediately revealed and striking.

I would like to separately note that this format of Bosch will very often be found in his other works. If we note the tondo format, then unlike other Italian masters, such as Raphael or Botticelli, whose circle is an ideal figure, in the understanding of Bosch, the circle is the meaning of universality.

The following fact is interesting: when a master from Holland begins to enclose a certain image in a circle, he means that such a case is far from the only one, but an allegory of all people on the planet.

As for the text, which is written above and below the circle, it fully describes the situation that is depicted on the canvas. It says that among the boring landscape, settled down 4 people who, who knows how, turned out to be here. The picture is really amazing with its idea.