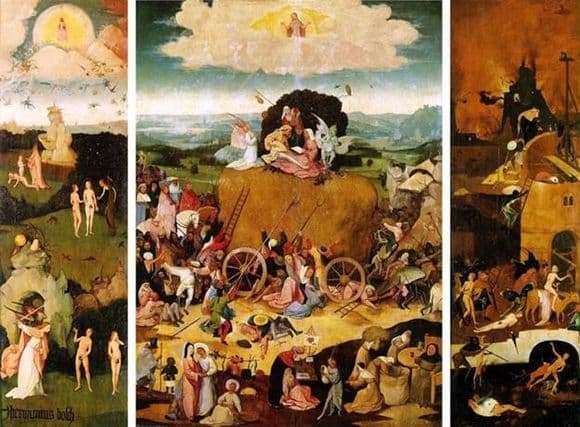 The legacy of Jerome Bosch is unique. Triptych “Voz sena”, which is five hundred years old, has no analogues in world painting. Written in the style of “Alla Prima” without preliminary sketches and drawing, the picture is aesthetically perfect, allegorical and filled with philosophical depth. The painting consists of three canvases. The left, “The Fall”, shows in detail how the exile of man from Paradise occurred.

The central part, the largest in size, “Carriage of Hay,” vividly depicts the world of human vices and unnecessary fuss. The right side – “Hell” – paints what a person’s life in sin will lead to. Each picture – its own world, where there is not one extra detail. Landscapes, attributes carry a deep meaning. First there was God, he gave life to all and expelled the rebellious angels from hell, turning them into underground demons. In the picture we see eccentric images with wings, tails and various processes that leave a transcendental height. But man also did not become obedient, succumbing to the serpent to the tempter with a human face. What led to this world is colorfully shown in the central part.

A haystack is a symbol of earthly wealth, which, although it is to seize everything, without disdaining to steal, murder or cunning. All evils are traced by the author at the foot of the stack. People do not think that Christ is watching them, everyone is busy with meanness: nuns get drunk, ordinary people fill their stomachs and are given carnal pleasures, only an old man, wise by experience, shows his grandson a picture of the world, hoping that temptations can be avoided. However, the third part realistically shows where werewolves with fish heads and human legs are dragging a cart with hay to hell. There are waiting for blasphemers, libertines, liars and thieves. For them, the gallows, the rack, and the people devouring alive, animals, are ready. Truly the world seen by Bosch has changed little in five centuries. The picture is amazing, makes you think and rethink the usual things.