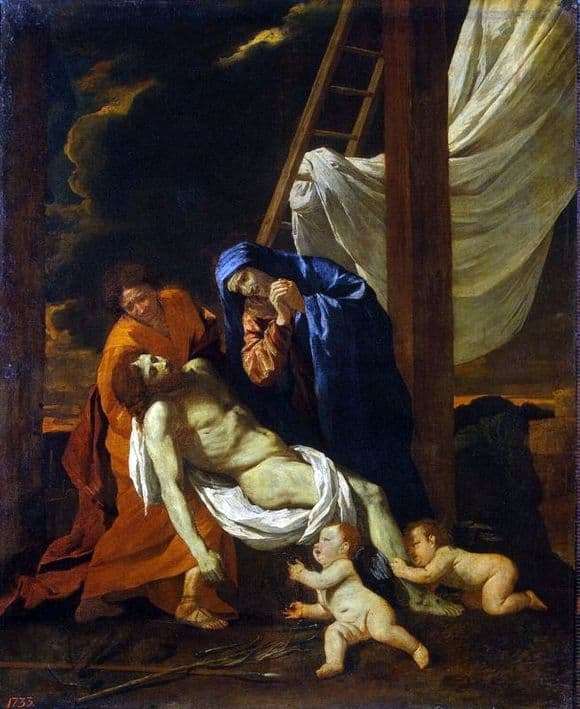 Nicolas Poussin – a representative of French classicism of the 17th century. From early childhood, he loved to draw. His love for biblical scenes went from the local painter Varen, who wrote several paintings on the altar of the local church. This for the young artist played an important role in choosing the direction.

In his works one can see the mind, put at the forefront, he ponders every detail, works hard on each line. It seems that the artist was saturated with the plot, that he studied it completely, from beginning to end. He lays out all his feelings, emotions on the canvas, forcing people to empathize with the event.

Poussin in his Hermitage painting “The Descent from the Cross” conveys the feeling of grief, great sorrow, which permeates Mary’s face. As if the women themselves are suffering the flour that fell to the lot of the only sinless person who suffered for each of us. The artist emphasized the old age of her face, exhaustion with suffering, feelings, her heart is ready to split into pieces. She folded her hands in prayer.

Women’s clothes blend in with the general background of the painting, the artist chose a dark red color that involved the general background of the canvas. The landscape reveals the drama of the situation. The sky is striking in its sinisterness, as if to say that the hour of reckoning for what was done is not far off. The sky, an unprecedented red dawn, merges into a whole with the whole composition, it reinforces the feeling that engulfs all the faces in this episode. A strong contrast to the purple and dark blue is the light, almost white garments of Jesus Christ, the white canvas on the cross.

The body of our Lord merges with the tinge of two innocent babies – angels who grieve with women and clasp the feet of Jesus in deep sorrow. This picture shows the contrast between good and evil, the drama of the episode and the retribution following the events.