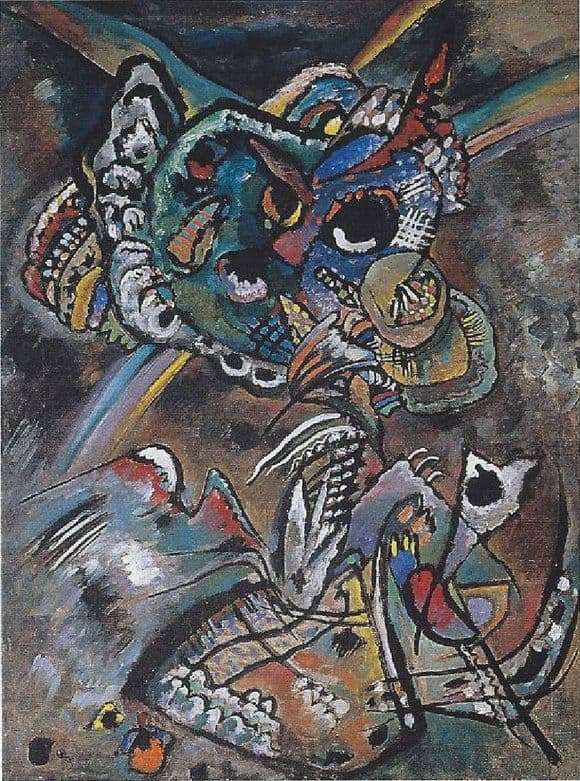 Kandinsky was one of the most famous artists of the twentieth century, becoming the face of abstract art. Almost all the paintings written before 1921, were a reflection of the Apocalypse. This picture needs no explanation, since abstract art distracts from concrete images and forms in the audience an individual attitude to what is depicted on the canvas. The artist preferred the style of spontaneous writing, which depicts mysterious forms that are mysterious monsters, as if descended from Bosch paintings. The creator seems to create a world of nightmares, concealing many secrets.

The artist for some time studied the work of the mentally ill, inspired by their immense inner world, not distinguishing between reality and fiction. He tries to understand how inner vision acts, distinguishing colors and harmony of forms. Some see the whole Universe in this picture, which is in chaos and hides evil in its space. It causes such emotions as anxiety, confusion and premonition of something tragic. At the same time, Kandinsky very brightly and deeply depicted the outlandish beauty of destruction.

The master created the canvas, being in Russia and experiencing a difficult period in his life. Events occurred in the country that negatively reflected on people, causing them to go through troubled times and to see the suffering of others. This was reflected in the work of the artist, who was very worried about his homeland. Kandinsky traveled a lot, visiting countries such as Africa, France and Italy. He lived in Berlin for a long time, but he spent his last years in Paris, becoming one of the participants in the international artistic process. He went down in history as a graphic artist, theorist and founder of abstractionism.