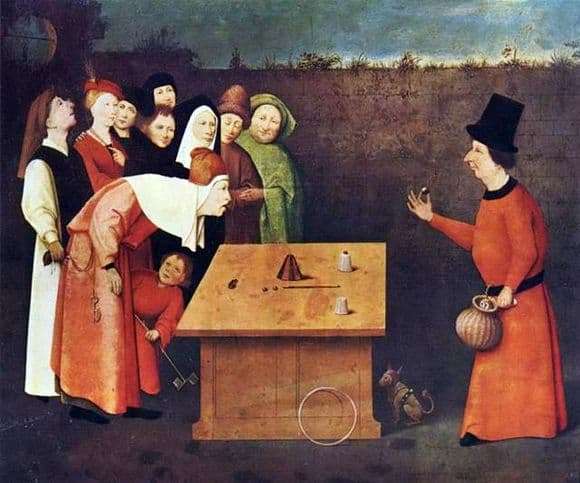 The painting “The Magician” by the Flemish painter Hieronymus Bosch, unfortunately, has not survived. Today you can admire only copies of this work. The most accurate of them is the work that is housed in the museum of Saint-Germain-en-Laye.

Date of writing the original is also unknown, only allegedly referring to the early work of Bosch. This is consistent with awkward shapes and a violation of a perspective contraction, corresponding to the master’s immaturity.

The picture is an example of eternal satire, reminiscent of how blind faith and stupidity destroy people. The plot of this scene has two interpretations. Some researchers call a warning about fraudsters and reproach those fools who are ready to believe sly and clever crooks. A magician and inquisitive onlookers are located near the broken stone wall.

On the table are visible means of a charlatan fooling a gullible public. It is not immediately possible to discern at the left edge of the table a frog, over which, in amazement, one of the spectators bent. The magician had just convinced him and the rest of the public that she had magically jumped right out of a man’s mouth. Thus, having fully captured the attention of the crowd, the charlatan gives the opportunity to another rascal or, perhaps, to his partner, to empty the pockets of duffers. The dramatized deception is expressed by the symbols of an owl – a type of devil’s wiles, and a dog in a jester costume.

Others trace in the retrieving of the frog an appeal to the church rite of exorcism. From this point of view, “The Magician” is not just a humorous scene, but a mockery of the clergy, like a fake wizard, fooling the heads of the parishioners.

Often, the “Magician” is regarded as a satire on magicians-swindlers and stupid pozin, ready to trust in any rogue. In extracting the frog, art historians have suggested that the exorcism of the devil is ridiculing the church rite.

The film acquires an anti-religious protest, becomes a parody of the clergy fooling naive parishioners. This version is supported by a magician’s dress, reminiscent of a cardinal sotan, and the outfit of a thief is a Dominican monk.