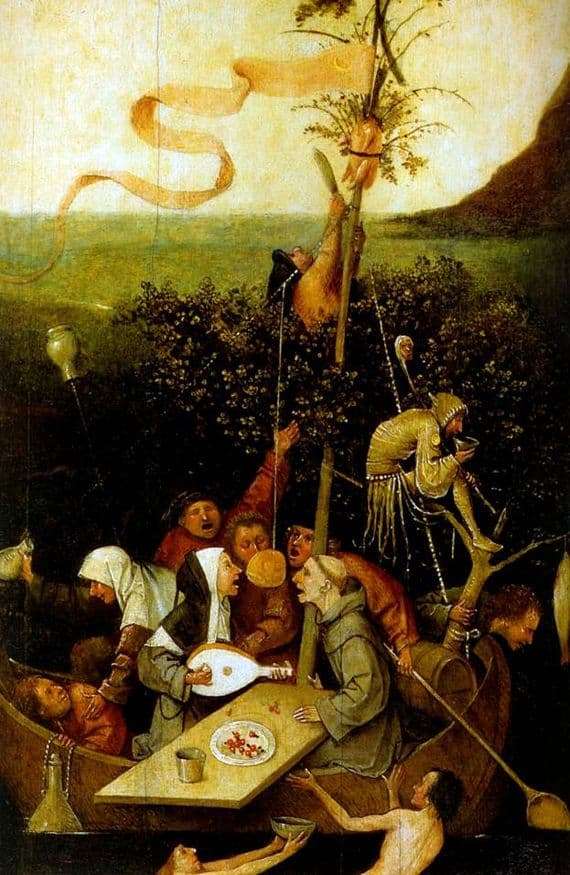 Bosch is a gloomy gothic artist of the Epoch of the Northern Renaissance with a head full of amazing and strange thoughts, which were poured onto the canvases with grotesque and demonic images, along with moral tendencies. While the Church was considered the only and unshakable dogma, and the clergymen were representatives of the highest nobility, Bosch openly mocked them all together.

This can be clearly seen in his painting “Ship of Fools”. The ship – a traditional symbol of the Church in ancient times, is filled with different people. In the center, among the people, sits a monk and a nun playing the lute. Instead of the mast of the ship grows a living tree – Mayskoye, instead of the helm – a broken bough. People on the ship and the clergymen drink, rage, and bawl songs. Someone is bad from excessively drunk wine, someone eats up to hiccups, and someone is so stupid that he is rowing a scoop as if with an oar, trying to speed up the movement of the ship. The helmsman of this ship is a jester in a ridiculous costume and a cap with bells. An entire owl gazes imperturbably on this whole coven, from the branches of a tree.

The picture is literally oversaturated with two-digit characters. Lute is an allegory of the female genital organ, the May Tree and the owl are symbols of evil, heresy and the devil in the Middle Ages. The picture makes clear to everyone who looks at it that this ship has no future, since it is not controlled by anyone, people are restless and sooner or later turn the ship upside down, it will slowly go to the bottom. Unveiled image of the Church (ship), which is mired in sin and moral lust, but still controls people, absolutely not caring about the salvation of their souls. All the figures in the picture cause antipathy, they are flat and ugly, as if inept masks, and the ship’s instability and ephemeralism underscores the meaninglessness of everything that happens.

The painting “Ship of Fools” was the upper part of the triptych, which, unfortunately, was not preserved to this day, depriving the pleasure of contemplating the next creation of a bold and progressive, gloomy genius of irony and sarcasm, Hieronymus Bosch.