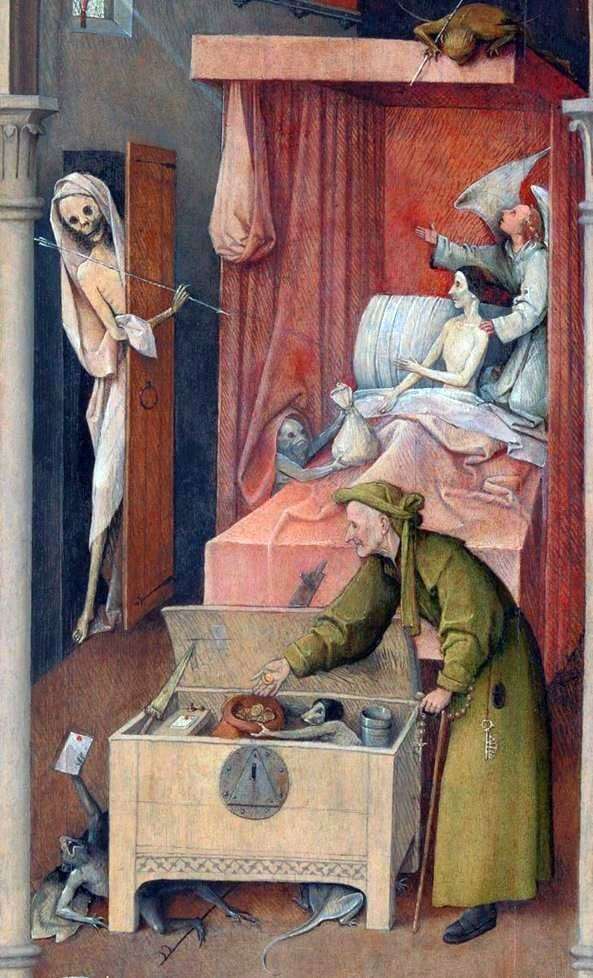 This painting was created by an artist from the Netherlands. She has a fairly straightforward name “Death of a Miser.”

The main feature of the image is the style of placement of the image in space. The picture is strongly elongated vertically, which creates the impression of an altar pattern. Fits and themes. As for the proportions, it is still important to note that the picture was not considered separately. She seemed to be part of a triptych cycle, where, besides her, there was also the “Ship of Fools” and “Allegory of Gluttony and Love.” They had the same dimensions, so they could be placed on the altar sash.

It is important to note that the triptych theme was also similar. All images narrated about the sins of man, about his real essence. In this picture, we see the Guardian Angel supporting a man dying in his bed. The angel tries in every way to turn the head of the dying man in such a way that his gaze is directed at the crucifixion, but he does not want to distract himself from his worldly problems. And what could be his problems? Everything is quite banal: a man is stingy, and even now he does not want to say goodbye to his money. He continues to reach for a bag of precious and so beloved savings. But this is not his money, this is gold, which the devil himself draws to a dying person.

He already happily looks out from under the floor. It is interesting that in the very chest of the dying man, where his money lies, demons already crowd. And here is another demon: this one, apparently occupies a much higher position, because his mantle covers his shoulders, and a sword is attached at his side. It is this power that a person loses on his deathbed. She will never find her again. This illustration at that time could be found in the book “The Art of Dying,” which was reprinted and reprinted more than once not only in the Netherlands, but also in neighboring Germany.