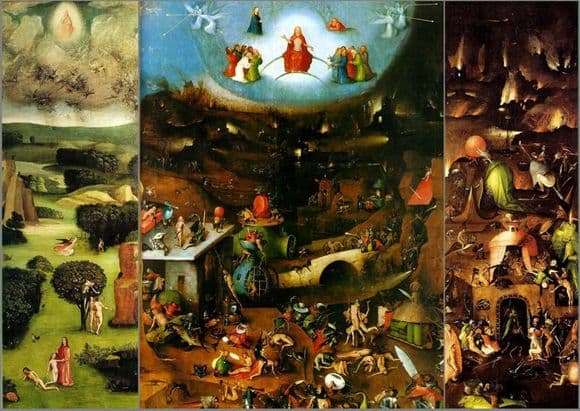 The plot of the triptych is intuitively understandable to anyone who is familiar with Christian legends at least to some extent. On the left casement is Paradise – it tells the very beginning of the biblical story. Here the Lord creates Eve from the side of the sleeping Adam. Here Adam, together with Eve, try the forbidden apples from the tree of the knowledge of good and evil. Here is a shining archangel with a sword in his hand driving them out of the Garden of Eden. In the clouds above them, angels fight with fallen angels, dropping those down. And above them is Christ in the radiance of glory and power.

The middle casement depicts the Last Judgment. Upstairs, there is a judgment seat, the trumpets of the last hour trumpeting, angels crowd at the Savior’s throne, and the righteous stand at his feet, preparing to ascend to heaven – it is noteworthy that there are very few of them compared to sinners, which can express the pessimism of the artist not so much. And beneath them begins hell. Mill millstones rotate, devils are tormented by sinners, sinners are hurt to other sinners, and although this is only a picture of judgment, it is already very similar to hell.

The last door is actually hell, and it evokes extremely unpleasant thoughts about the finiteness of life and that if hell really is, then it is better not to sin. Bosch’s fantasy manifests itself in all its glory – sinners are tortured, pierced with arrows and blades, burned, boiled alive, torn to pieces, hung, like pig carcasses, on hooks. As far as paradise is present, hell is as alive and graphic as if it were much closer to an artist.

If the artist set himself a goal, then this goal is to turn away sinners from hell in the simplest way. Intimidating them.