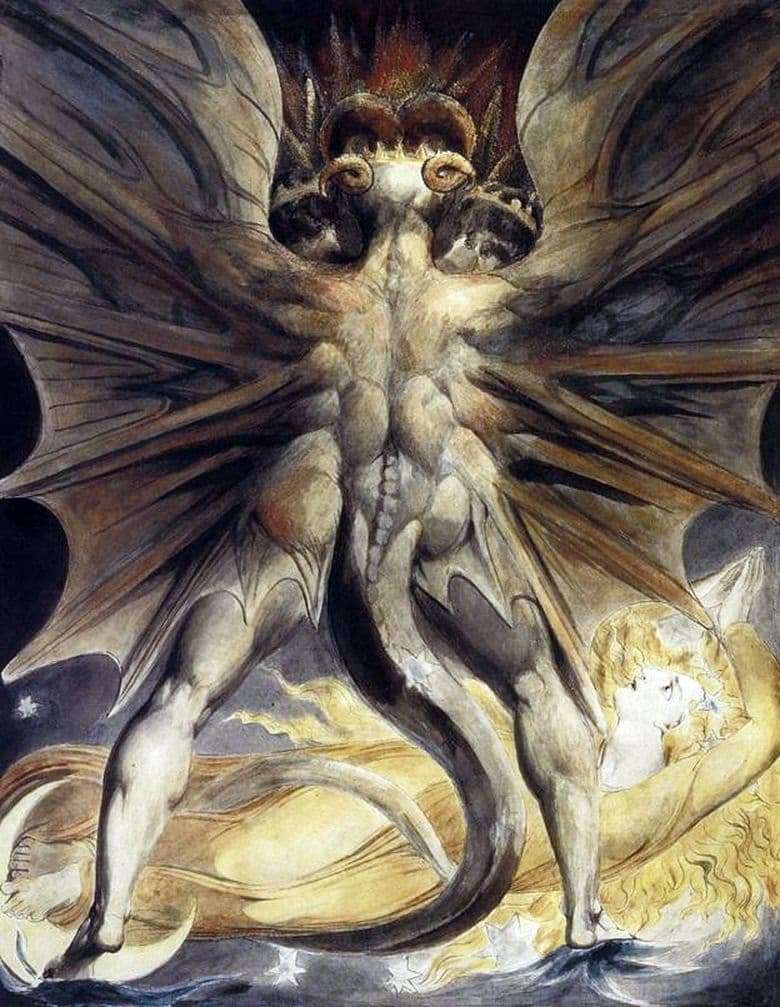 The painting “Red Dragon” was written by English artist, engraver and poet William Blake in the period from 1803 to 1810. The canvas also has other names “Red dragon and a woman dressed in the sun” and “Great red dragon”. The work was done in watercolor, graphite and ink in the style of romanticism.

The plot came from the 12th chapter of the Apocalypse. A woman with a wreath of twelve stars froze in fear of a huge dragon hanging over her, ready to grab and eat her baby as soon as he was born.

In this work, as in most of the other works of William Blake, there is no usual transfer of perspective; the composition is built in accordance with his own mystical vision of the world. Most of the canvas is occupied by the grotesque body of the monster. He turned his back to the viewer, his face is not visible. A huge, powerful, muscular, energized, hypnotizing body, occupying most of the canvas. Sharp,

well-developed wings and posture convey a willingness to rush to the victim and aggression. The dragon has already cast the moon and the stars, now it’s the turn of a man embodied in a woman and her unborn child.

The girl in gold lies prone. Her eyes are filled with horror, tense body, posture, bare legs demonstrate complete helplessness in front of the monster. Hands folded in a plea. A woman occupies the bottom of the picture. However, the color of her clothes, posture, emotions attract attention and make the main character.

Probably, golden clothes symbolize martyrdom and holiness as opposed to the dark colors used to depict the monster’s body. Red rays above the head and the horns of the dragon emphasize the tragedy and powerful tension.

The picture makes a grandiose, majestic impression on the viewer, makes you think about what the artist wanted to say, try on the image of famous images, see something of his own.

The canvas is stored in the Brooklyn Museum, USA.