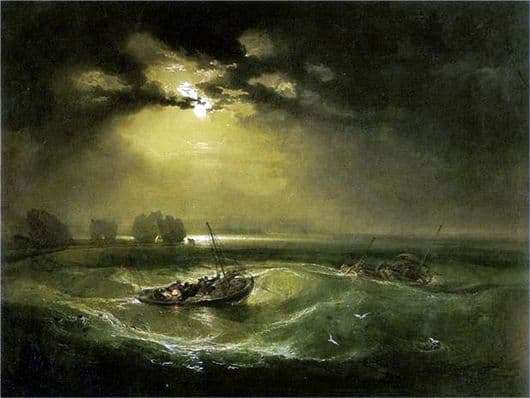 It is interesting to note that William Turner masterfully mastered watercolors, but nevertheless, among his series of ten water-color works, only one was done with oil, and this work was “Fishermen at Sea”.

It is worth noting that this picture received a lot of positive feedback, but like the artist himself, the skill of mastering the technique of working with oil was at a high enough level. Going directly to the canvas itself, it is impossible not to notice how the master pays special attention to all the smallest details. It is seen that the artist, performing the drawing of sea water, you can see the perfect transfer of light, shadow and glare, you can even see how the master transmits all the subtleties of the reflections from the light of the lantern and the moon.

When painting a picture, one feels that the artist is trying to convey the emotional state as much as possible and the feeling that everything in this world is on a thin, unstable face. At the same time, it is impossible not to notice that such a state in the picture directly conveys the state of the artist himself, his delicate world. The relevance of this is emphasized with the help of the illumination of the moon, which for a moment opens the curtain of darkness over the sailors and the viewer can see their confusion and helplessness before the powerful elemental force.

The canvas is dominated by cold-green shades, which further enhances the emotions prevailing in the picture. Together with the skillful use of glare, the sea abyss becomes literally alive and transfers its energy to the viewer.