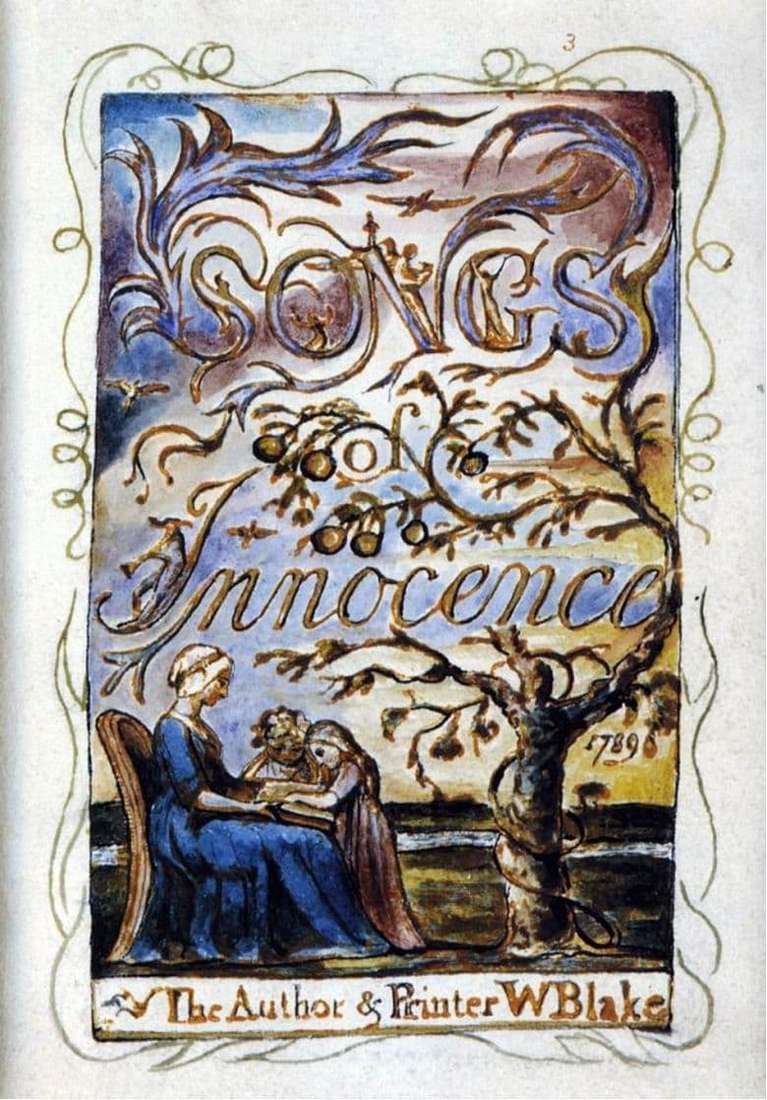 The painting by William English artist, engraver and poet William Blake was completed in 1825. It was created as a title page for a book of poems with the same name by the same author. The picture is made in the style of symbolism.

Technique – etching, printing in orange-brown ink, painted with watercolor and gold. Argued that the work of W. Blake was the basis of the development of etching techniques. Instead of making cuts on a copper plate and filling them with ink, as suggested by lithography that existed since the Middle Ages, he applied special resistant paint on the plate. The surface into which the paint was eroded, became slightly higher and allowed to make prints.

The plot is based on a woman reading a book to a boy and a girl standing next to her. A group of people occupies one of the lower corners of the picture. On the other side, an oak tree spreads its branches. In the upper part – the name of the work, made in bizarre volumetric letters and supplemented by figures of people and ornaments. It is believed that the plot of the picture is based on the visions that the artist experienced.

The work is filled with lyricism, joy, endless calm. There is not a drop of tension or tragedy in it. The images in the foreground are worked out in sufficient detail, while the sky, which visually occupies the back of the picture, is made with broad strokes.

The primary colors are blue and gold, the colors of meekness and divinity. The blue sky is repeated in the bright blue of the female dress. Golden is present almost everywhere: in letters, small figures of angels and piper, fruits of a tree, on the sky, meadow, children, the head of a woman. The contours of the ornament, which is present both in the picture itself and in its frame, are also filled with this color.

Symbolism permeates all work. Meadow symbolizes paradise, water – purity and humility. Sprawling oak branches, free, filling in most of the paintings and covering a woman and children, symbolize divine protection and faith.

Work is stored in the Metropolitan Museum, New York.