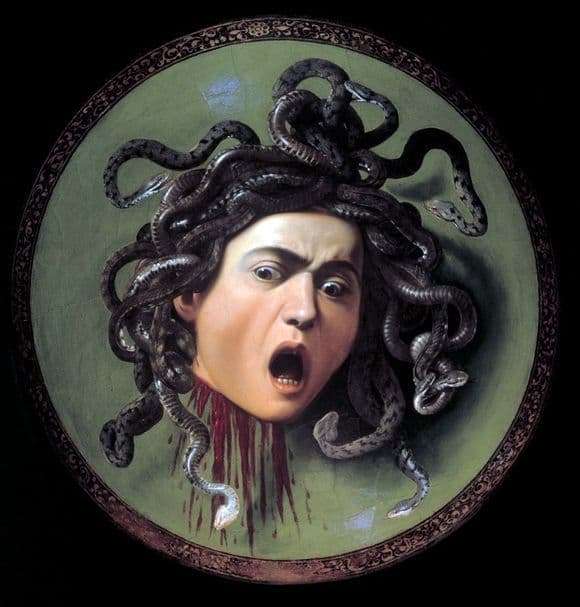 Medusa the Gorgon was the daughter of the naval elder Fork and the nymph Keko, the only mortal of the three Gorgon sisters. Her hair was like snakes, and her eyes could turn a man to stone if he did not have time to turn away. Her head Perseus commanded to bring the king Polidekt, who kept the hero in the service. Following the advice of the gods, he got winged sandals, a magic bag and an invisible cap, as well as a mirror shield in store.

Faced in a duel with Medusa, he did not look at her face, only at the reflection, and therefore managed not to die. The severed head was placed in a bag, hid from the Medusa sisters, covered with an invisible cap, and when Polydect tried to deceive him with a reward, he almost pulled his head out of the bag, which immediately removed all the questions.

“Medusa Gorgona” Caravaggio written on canvas, stretched on a shield – a noble person wanted to make an unusual gift to a friend. Medusa is depicted at the moment when, in the reflection of Perseus’s shield, her head flew to the ground, and unlike earlier interpretations, she is represented by an ordinary woman, not a monster. Hair snakes twist and fight, blood gushing from the neck, face distorted by a mask of horror, cry, bewilderment, but if you imagine it as it would be without these emotions, you can understand that the Gorgon was beautiful. She has the right features, an attractive cut of the eyes, and if it were not for disfiguring her deadly horror, there would be nothing repulsive about her.

There is a very cautious, non-obvious idea in this – the monster does not the monster, the snakes on his head or hair, not what his face is, but what emotions can be read on this face. Medusa killed people – because she is guilty of death, because she is a monster and should not live. Without this, without rage and fear, she would be no worse than the usual human girl. The head of Medusa is made by Caravaggio with realistic graphic.