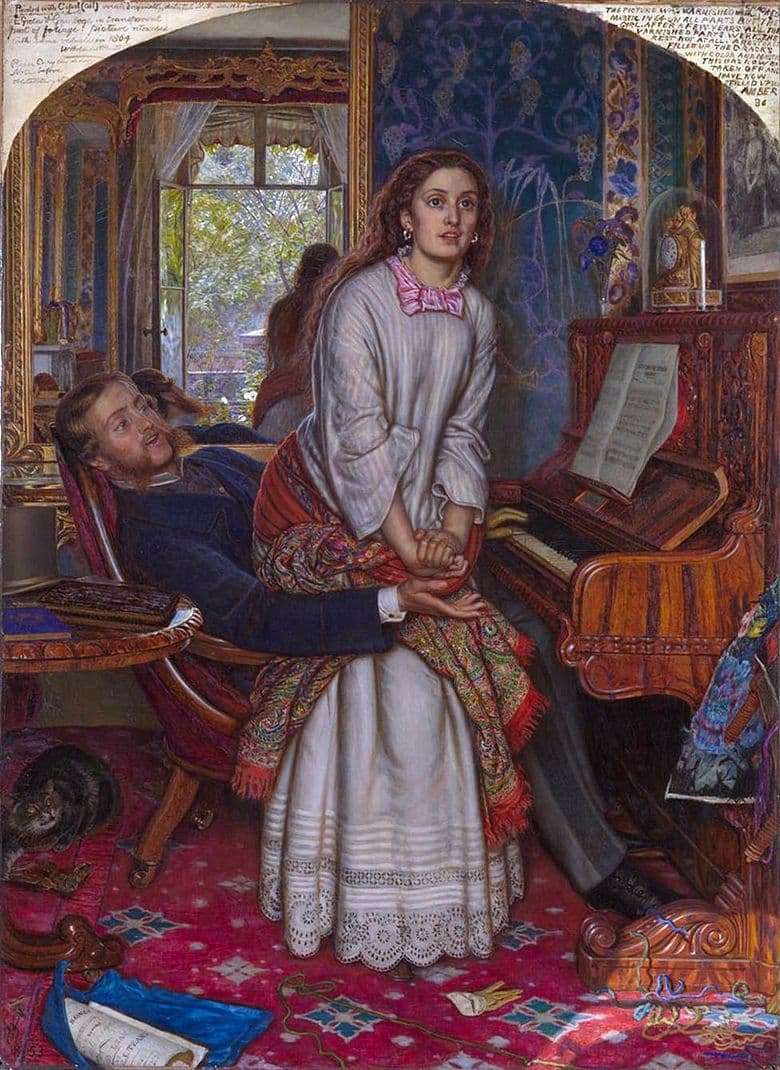 The first glance at the canvas may deceive the beholder, since it seems that the couple is in the center at the time of a sudden conflict. The girl suddenly gets up from the knees of a man, her face conveys a sudden insight and awareness of what is happening. There is no wedding ring on the woman’s hand – it means that she is not married. Looking at this element, the picture begins to become clear: it is likely that she is a fallen woman who has only now realized all the depravity and sinfulness of her actions.

The man’s face is not surprising: on the contrary, he seems quite cheerful and contented. This element creates a contrast between the emotions of the heroine and the stranger, it also adds to the expressiveness of the woman. The background of the picture is carefully worked out, which is necessary in order to present the full story of the work. So, almost all the elements of the picture carry a certain meaning: the cat that caught the bird under the table, the piano clock in the upper right corner is covered with a cap – this speaks of irrevocably and uselessly leaked time. On the piano one can see Thomas Moore’s work “Often on a Quiet Night”, which deals with a lost past, beautiful times that have gone to eternity.

The work is imbued with longing for the past and sadness. Knitting threads in the lower right corner are not the most noticeable, but very symbolic element. The thread that may be associated with fate is not linear, and is randomly and separately located on the floor. The girl’s startled, but clear face indicates that she suddenly saw everything that surrounds her: both sin, lost time, and a curved path leading only to hell. However, the girl is still young, which means that awareness is the first step to correcting missteps.