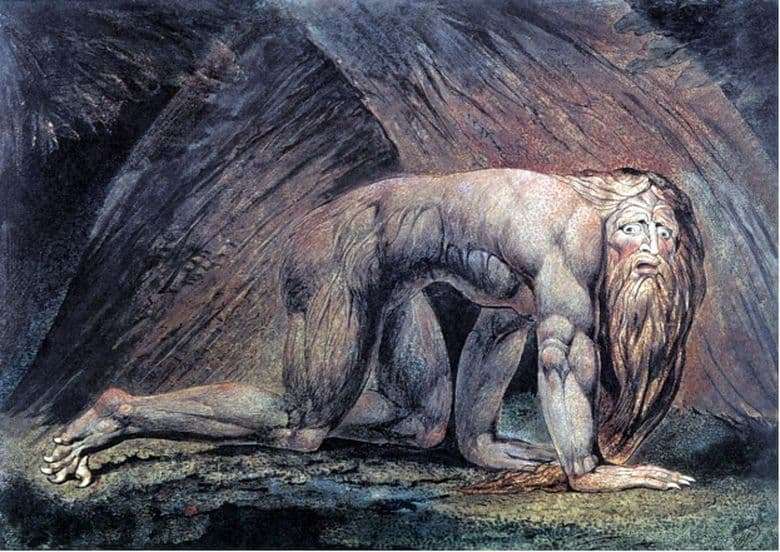 The color engraving “Nebuchadnezzar” was made by an English artist, engraver and poet William Blake in 1795. Manual coloring, ink, watercolor were used. The work is filled with symbolism.

The plot is taken from the book of Prophet Daniel. The Babylonian king Nebuchadnezzar built Babylon to the glory of his power and greatness. For vanity he was excommunicated from people, he ate grass, washed with dew. Hair grew like a lion’s, and nails like a bird’s.

The picture depicts exactly the moment when a person, in fact, has already lost its human form and began to turn into a beast. It is no coincidence that the pose of the hero of the engraving was chosen – he stands on all fours.

Just great is the work of light and shadow. Lower body, legs – dark, gloomy, are the embodiment of the bestial beginning. Muscle lines, dark dips on the torso and hips complement this impression. At some point, the viewer’s imagination turns them into wool. Huge sharp eerie nails highlighted on the feet emphasize the rapacity and non-human essence. Lit only the head, upper body and toenails. Perhaps the bright head and hands symbolize the human beginning.

However, the thought about this disappears as quickly as it appears – it is obvious that the hero’s face loses its former appearance. Insane, full of horror eyes, half-open mouth, a huge mane crosses the expectation of rationality, dignity and respect. In the figure there was not a trace of the vanity and pride of the former king.

It is worth paying attention to the study of the breast. The contours of the muscles resemble a hauberk, tightly clutching the chest, depriving the freedom of breath and a heart in a vice.

For the work is not accidentally chosen engraving. It allows you to achieve three-dimensional image, sharpness and clarity of lines. The composition encourages the viewer to explore every corner of the picture, but his eyes constantly return to his eyes, as if relating to the insane look, as with the center of the plot, everything that is depicted in the engraving.

Work is stored in the Tate Gallery, London.