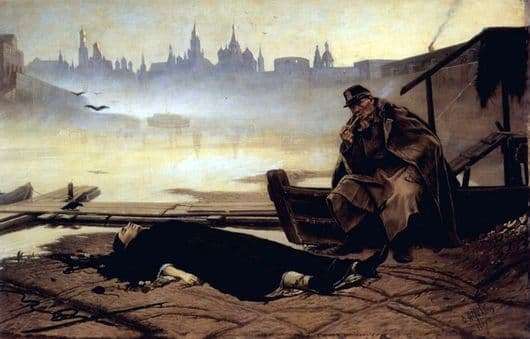 Written in 1867, the picture shows the everyday urban scene of royal times: a drowned girl caught from a river and a policeman guarding her dead body. A middle-aged man smokes a pipe and seems immersed in his own thoughts, absolutely indifferent to what happened to the girl. However, there is something in this picture that takes it beyond the framework of a strictly domestic genre. Something that makes me think back to this story again and wonder: why does a drowned woman seem to be more alive than a person sitting next to her?

In the depicted scene, you can see the three main characters: the dead girl, middle-aged policeman and the outlines of the city behind them. The characters are combined into a single whole with the help of a set of expressive means by which the artist expressed his idea.

She looks as if freed from a heavy burden, a difficult fate, something that tormented her in life. Her posture expresses relaxation and almost hovering in the air – talking about it long disheveled hair, plenty of space around the reclining figure and location away from the visual center of the picture.

Policeman – Conversely, if enclosed in a rectangular frame, is organic in its movements and opportunities. This is a typical serviceman acting strictly according to the orders of a superior, and having no desire to act on its own. Maybe he is sorry for the girl, but apparently he doesn’t show it at all. It is also possible that his feelings have long turned into the breech of the reaction and replaced by indifference.

The third actor – the city in the background – is shrouded in morning mist, a flock of birds flies over the surface of the water. And the drowned woman is also depicted free, like a bird. It is known that in the days of the artist’s life suicide was considered a sin and was condemned. Thus, portraying a drowned girl calm and free, the author of the picture could express her empathy.