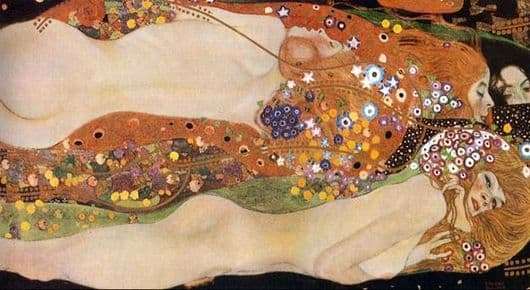 The appearance of these pictures, or rather of these feminine figures, entices the viewer into the world of sweet fantasies, enchanting all men and young men with their appearance, causing a rapid heartbeat and a quickened pulse. A similar story has already been met in the works of Gustav in “The Current” and “Silver Fishes”, and now, several years later, he wrote two such works.

But what kind of wonderful virgins, resembling too thinner fairy-tale mermaids in one picture and living, young girls in the second? The name makes it clear that appearance is deceptive, and these beauties look more like Nymphs: they are just as cold and slippery, and all their charm is bestowed on them by an icy ocean. They are happy in their kingdom and the desire for love or the search for the halves does not live in them. But nevertheless, transparent pinkish skin, bright red hair, the end of which merges with algae and water and the natural forms of these virgins, do not cease to attract.

Gustav liked to depict in his paintings to depict the underwater kingdom with its inhabitants: fish, shells, mollusks and light algae. Among all the depths and corals, we see the image of a woman to which all symbols inevitably lead. In this unthinkable dream, algae are reincarnated into hair, everything merges: figures, shells, stars – into a single whole, into a composition where dark and light colors, bright and dull coexist, turning everything in the picture into a twinkling magnificent symphony.

It can be immediately noted that Klimt preferred to the writing of female images as masculine, the latter usually playing the role of a lively background, or simply were relegated to the background. But the women in his paintings are in all its glory, corresponding to the fantasies and desires of their creator.