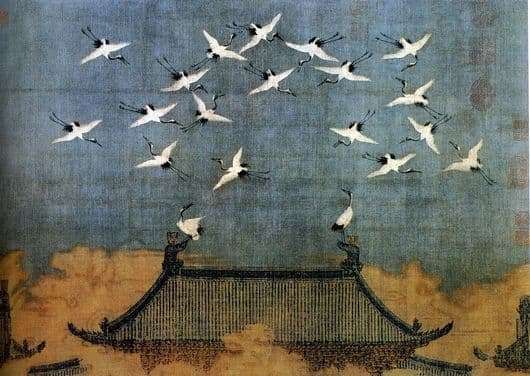 Artist Zhao Ji for the history of China is important. By the way, this is the pseudonym of the eighth emperor. He devoted all his time to the study of various types of art, and therefore, as a ruler, he did not become famous among his people. But he was a skilled calligrapher, painter and poet. As a child, the future artist loved to paint and by the seventeenth year of his life he became quite famous in the field of art of that time. Zhao Ji portrayed mainly birds and flowers in traditional Chinese genres.

Ji became known for many of his creations, from the paintings of the most famous works – “Cranes”, “Magpies on the pine branch”, “Dove on the branch of a blossoming peach tree.” His name is associated with a large number of works. The goal of his life, this great man believed to save Chinese culture from conquest. With its help, the Academy of Painting was created, with a strict training system.

For a basis in the Chinese art of Ji lies the line. With the help of simple lines are composed of highly artistic works of the author. When writing the painting “Cranes” the master applied solid, smooth, strict lines that undergo various changes to convey the smallest details.

Crane in China is a symbol of longevity, dedication, honor, vigilance. Since ancient times, this bird has admired man with its endurance, beautiful camp, sonorous singing, beautiful dancing and thoughtful appearance. Crane is very revered by the Chinese and is considered the king of all existing birds on earth. The crane according to the myths of China accompanies the gods, all the immortals and sages. The latter, according to ancient beliefs, after death become cranes.

The picture of Zhao Ji depicts a flock of cranes hovering in the sky, it is considered a symbol of success in life.