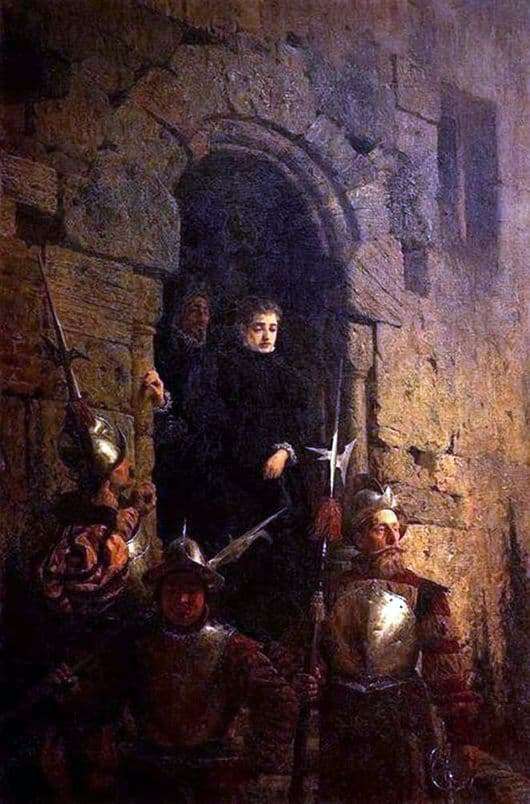 The painting was painted in 1875 in oil on canvas.

Painting genre: historical. Polenov painted a picture at a young age. His canvases are valued not only in our country, but also in Europe.

The canvas depicts the arrest of Countess d’Etremon. The picture is filled with the tragedy of those cruel and bloodthirsty times. Polenov protests injustice and violence against people. The picture strikes with gloomy tones that convey the full weight of the event.

The Countess was arrested and her eyes lowered, but she is unshakable in her faith and convictions. Guards in steel armor proudly look ahead, as if announcing another captured enemy.

The artist reproduced all the details with documentary accuracy. The aged gray-brown tones make the picture grim, corresponding to the historical plot depicted on it.

The concept of “Huguenot” in France was first used as a mockery of the Protestants, but later it became the main name of the protesters against the Duke of France and the priests. They distributed leaflets with their ideas, conducted their worship, in order to overthrow the government. This caused anger and aggression from opponents.

At first, the Huguenots were banned from their mass meetings and ministries, but soon mass harassment, arrests and executions began. They were declared heretics. The bloodthirstiness and ruthlessness of that time are unequaled. Huguenotov, like witches, burned at the stake.

One of the events included in the history of that time was the St. Bartholomew night. After which a truce was concluded, but soon the Huguenots continued their attempts to defend their truth, and the hunt began again.

Polenov’s painting was written under the influence of the events of that epoch, she received recognition everywhere at the exhibitions presented, for which he was awarded the title of academician.

The picture is in the State Russian Museum. Saint Petersburg.